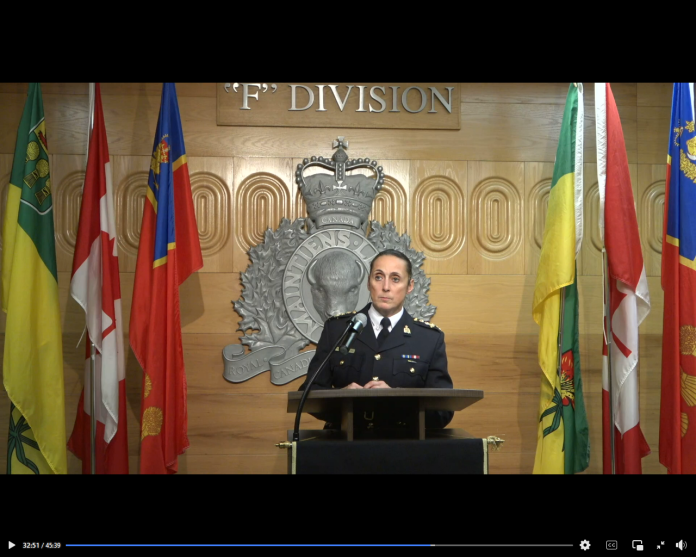 The Saskatchewan RCMP have revealed that Damien Sanderson, one of the suspects in September’s mass stabbings in the James Smith Cree Nation and nearby Village of Weldon, did not commit any of the homicides but helped plan the attacks with his brother, Myles.

During a media conference on Thursday afternoon, Saskatchewan RCMP Assistant Commissioner Rhonda Blackmore provided an update on the investigation into the tragedy that occurred on Sept. 4 that claimed the lives of 11 people and injured 18 more.

Blackmore said that after completing 250 interviews, processing over 670 exhibits, reviewing and following up on 100 9-1-1 calls for service, investigation has confirmed that Myles Sanderson killed Damien and committed all of the homicides alone.

Damien is now officially included in the total number of deceased victims.

As a result of the continued investigation by the Sask. RCMP, Blackmore was able to confirm that Myles and Damien Sanderson were actively selling drugs in the community the day before the events of the mass casualty and were both involved in at least three violent altercations involving other individuals in the James Smith Cree Nation between Sept. 2 and Sept. 3.

“None of these violent altercations were reported to police prior to the homicides being committed on Sept. 4,” said Blackmore. “Evidence collected and analyzed by investigators to date, have determined Damien was involved in the initial planning and preparation for the attacks, we are still investigating the extent of Damien’s involvement.”

Hours before tragedy struck, Melfort RCMP unknowingly spoke with Damien at a residence in James Smith while following up on a report of a stolen vehicle.

Around 4 a.m. on Sept. 3, officers were dispatched to the community after calls from a source who wished to remain anonymous claimed Damien had stolen their car. While on-route, investigation determined that Damien had a warrant for his arrest for a previous assault. The two officers conducted extensive patrols around James Smith in an attempt to locate Damien and the stolen vehicle but were inconclusive.

The officers contacted the anonymous caller several times, asking for both an official statement and for suggestions of where to look for Damien. The caller refused a statement but pointed police in the direction of North Road on the James Smith Cree Nation. The empty vehicle was found parked in front of a residence on North Road immediately after officers arrived at the search area.

Officers knocked on the door of the residence and obtained consent from the homeowner to conduct a search for Damien, where police observed a group of seven individuals including three males. The men were asked to identify themselves, with none providing the name Damien Sanderson. The keys to the stolen vehicle were recovered inside the residence, but officers were unable to get any information from the occupants of the house about how the vehicle got there.

Blackmore said the two officers patrolled the community of James Smith in its entirety for three hours after receiving the initial call, but there was no evidence or witness statements at the time to support a charge of a stolen vehicle.

Through follow up statements during investigation, RCMP learned that Damien was at the residence during the time of the search and had provided a false name of a real community member to the responding officers.

Blackmore said the two officers were unable to recognize Damien when they spoke with him at the residence because he had undergone a significant change in build since the photo of him in the RCMP police record system was taken in 2014.

She also confirmed that RCMP have no information regarding Myles’ involvement with the stolen vehicle or whether he was also at the residence at that time.

“At no time during the first 9-1-1 report to police or any of the following conversations between Melfort RCMP officers and the caller on the morning of Sept 3, was Myles Sanderson’s name or actions or any threats or violence reported to police,” stated Blackmore. “The Saskatchewan RCMP had no information or indication that would suggest any violence was to occur.”

Due to the large amount of evidence, it will take months for the Saskatchewan RCMP Major Crimes Unit to piece together a precise, full timeline of the events that took place prior to and following the attacks on the morning of Sept. 4, according to Blackmore.

Blackmore said that investigators continue to corroborate witness statements with physical evidence to create an accurate picture of the motives behind the crimes and why some of the victims were targeted, “but the reality is, we may never really know exactly why”.