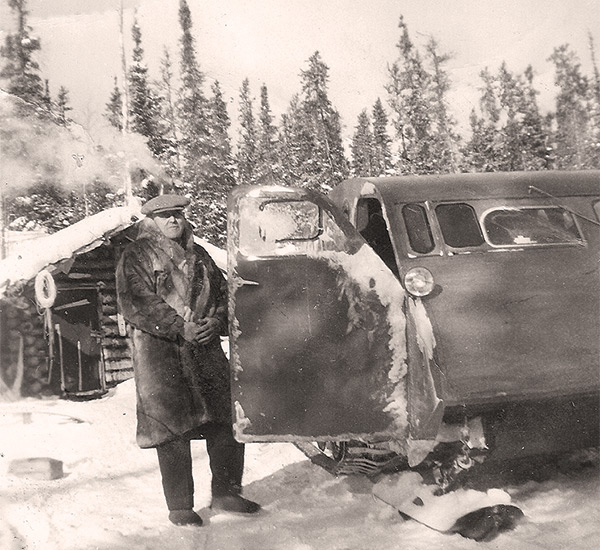 The following is the fifteenth installment in a series about Nan Dorland, a radio star from New York City who struggled to become a writer and a prospector in northern Saskatchewan. Follow at www.nandorland.blogsot.com or on Instagram @discoveringnan.

15 – John Albrecht’s Years as a Trapper

Nan’s second husband John Albrecht arrived in Regina, Saskatchewan on June 1, 1929. As he could not speak English, he went to work for a German farmer near Bulyea north of the Queen City. John worked there until threshing was over, then moved to the St. Walburg area. He worked for a year on the homestead of Adolph Studer, a farmer and trapper who spoke a little German. With Studer’s encouragement, John left in the fall of 1930 to become a trapper in the Big River area; he stayed there for four years. “I was not so bad,” John later told Berry Richards. “I made quite a few dollars with weasels; in the spring, rats [muskrats].” [Source: Richard’s interview with Albrecht, July 14, 1975. Provincial Archives of Saskatchewan, audio recording R-A873.]

It was while he was at Big River that John began to learn English. He ordered books from mining people in Big River, receiving at least 20 books on minerals and geology. These books not only helped him learn English, they also sparked his interest in prospecting.

While at Big River, a trapper named Ragnar Jonsson from Wollaston Lake talked John into moving further north and east to Wollaston. In June of 1934, John headed out, buying a canoe, more traps, and five sled-dog puppies from local Dene people at Pinehouse Lake. “The puppies were small, but they could run behind me,” John recalled. “And there I went on a trip – I tell you!” He trekked through hundreds of kilometres of wilderness to Wollaston Lake, paddling and portaging along the way with close to 800 pounds on his back, including a canoe.

John reached Wollaston Lake by the end of September 1934, only to discover that his friend Ragnar Jonsson had just left for Reindeer Lake and then further north to Nueltin Lake. “So I was alone there. Alone on Wollaston,” he lamented to Richards. “The Chipewyan had a rough year and even they didn’t come. So, I was just clean alone there. There was nothing. That’s the damnedest north, you know? It’s one hell of a long stretch.” Clearly, it was a lonely time for him.

John trapped in the Wollaston Lake region for three or four years. Les Oystryk, a historian from Creighton, Saskatchewan, who has done considerable research into the life and work of Jim Cumines, a fish and game warden stationed at Brochet on Reindeer Lake, generously shared information that he has culled from Cumines’ reports relating to John Albrecht.

Was John hiding his German ancestry? He had applied for, but not yet obtained his naturalization papers from the Canadian government and was considered an “enemy alien.” Trouble was brewing in Germany. According to Oystryk, Cumines eventually issued a non-resident trapping license to John so he could sell his furs.

In 1937, John moved up to Brochet, Manitoba, on the northern end of Reindeer Lake. That summer, he served as the guide for P. G. Downes on a journey to Neultin Lake. (Watch for an account of this trip in my next column.)

Immediately after the outbreak of the Second World War, John disappeared into Saskatchewan’s far north. After spending over two years in a British prisoner-of-war camp during the First World War, he feared being imprisoned again.

Unbeknownst to him, John had been granted a certificate of naturalization by the Government of Canada on September 9, 1937, but it never reached him. The certificate had been mailed to him at Brochet, but unfortunately it had been returned to Canada’s Naturalization Branch by the Post Office.

Cumines determined that, in the spring of 1940, John had flown to Stony Rapids, Saskatchewan, where he formed a trapping partnership with a Swede named Oscar Johnson, a man in his 70s. The two of them lived in a cabin at Selwyn Lake north of Stony Rapids and split their fur proceeds 50/50. The two also did some prospecting, finding gold, nickel and copper. The trapping supplied the money for prospecting. “We made more than we needed,” John told Berry Richards. “We had always money,”

Oscar Johnson decided to quit the north in 1945. After a few years trapping out of Selwyn Lake, the 75-year-old told John, “I can’t take it anymore.”

Three years later, John’s life changed dramatically. He co-discovered a major uranium source and got a new partner – Nan Dorland – who shared the same cabin at Selwyn Lake that he had previously shared with Oscar Johnson.

Discovering Nan Dorland – “This is the bush, and I love...