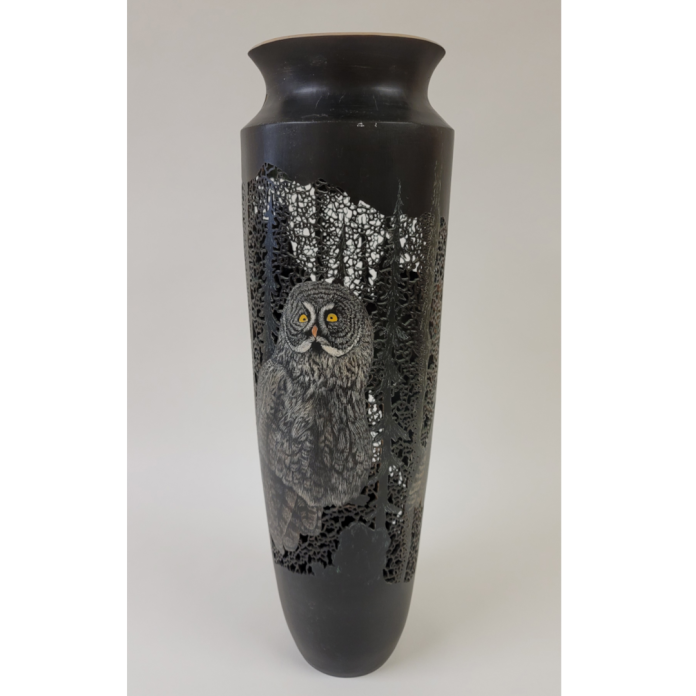 The Mann Art Gallery added to its collection in October thanks to a donation of work created by local woodcarver and woodturner Frank Sudol.

The donation was among 46 pieces divided amongst SK Arts in Regina, the Mann Art Gallery in Prince Albert, and the Moose Jaw Museum and Art Gallery.

Mann Art Gallery curator Marcus Miller said the Sudol piece was one of the first works acquired by the gallery, and it made sense to add more pieces to their collection.

“I’m very happy that they are here at the Mann Art Gallery and this is the right home for them because he was one of our neighbours,” Miller explained. “It makes perfect sense that we have a good substantial holding of Frank Sudol now.”

Sudol was born and raised in Paddockwood, but moved to Alberta as an adult to become a teacher. He retired early to Paddockwood and built a log home and ran a Christmas tree farm until he passed away in 2006.

Sodul was revered for his intricate wood carvings and designs, and his work has been featured in many publications throughout North America. The donation was made by collectors, Dr. Michael Kowbel and Mrs. Debbie Kowbel from British Columbia.

Miller said the process of bringing the pieces back to Prince Albert was a lengthy one.

“For some reason when I took the job a couple of years ago this was like a pending donation and it had been going on for years and years and years,” he explained. “I’m not sure what the (initial) delay was, but of course over the past couple years the delay was COVID.”

The collectors decided to split the work among the three venues, and met in Regina in October to allocate each piece. Mann Art Gallery representatives received a list of pieces and pictures, and did a Zoom call with the donors that lasted almost two hours before travelling to Regina.

Miller said the Zoom meeting was very useful to him.

“It was to see the pieces live and to hear him (Kowbel) talk about the pieces and what was personally meaningful to him,” Miller said. “He is not an art expert or anything, but he was passionate about these things so that was very good for all of us. He had little stories to tell about them as well, as well as anecdotes about Frank himself.”

After meeting in Regina, the Mann Gallery was able to come away with their top two picks. Miller said the three groups decided as a collective where the pieces should go, so each venue could have a “good, rounded representation” of Frank Sudol’s work.

“That made it much easier,” Miller said. “I was a little bit anxious about this day and would I get my stuff and would we be doing a lot of haggling, but it didn’t go like that. It was very convivial with all of us.”

The three venues agreed that the more eccentric pieces would go to SK Arts collection.

At the end of the day they wrapped up and packaged the art with materials they had brought with them. Miller said it was a great learning experience for the gallery.

“I just went home to Prince Albert that day with a car full of Frank Sudol in the back seat. It was a terrific day and I have to say that decorative art is not my forte, so I felt a little bit out of my element truth be told, but I ended up learning a lot about Frank Sudol, about his craft and what a great innovator he was,” Miller said.

Miller did his own research and found that Sudol’s influence stretched to American woodturners. One of his great innovations was discovering ways to turn large vases with incredibly thin walls.

From his own experience, Miller said the ceramics with thin walls show the signs of a very skilled woodcarver who was willing to take risks.

“Some of these vases are quite large—like three feet high—so he had these things on the lathe,” Miller explained. “He would be able to tell when he was going too far by putting in a kind of a lightbulb device that he had. It would glow through the wood to the other side so he could see how thick and thin his walls were, but even so I think the failure rate was very high.”

Sudol’s other innovations include painting the woodcarvings and incorporating wood burning and animal designs onto vases and pots.

SK Arts was also pleased to have the works join their collection.

“We are committed to comprehensively collecting the art of Saskatchewan; and with the generous Kowbel donation, a more comprehensive snapshot of Sudol’s innovative career will be preserved and made accessible to the public,” Permanent Collection Registrar Julia Krueger said in a press release.

SK Arts is the second oldest arts funding agency in the world, second only to the Arts Council of Great Britain.