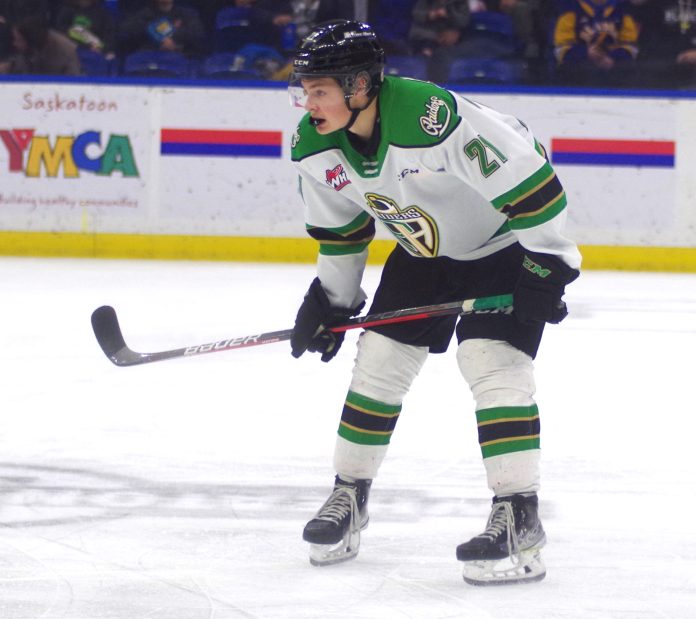 Ryder Ritchie is providing one of those noticeable beacons of light that gives Prince Albert Raiders fans hope and optimism.
When a team is going through a reload/rebuild phase, the biggest thing a club can provide is hope. Hope can come from knowing an honest effort is there.
Sometimes, it is hard to know if the effort is there after a bad loss, but it is possible to lose in a bad fashion on the scoreboard and still put in a good effort. There are times efforts are good and honest, but bad decisions are made due to lack of experience. Also, that is why players are in the WHL is to have experiences both bad and good that you learn from to become better.
Hope can also be created when you can see noticeable improvement in players, especially young players. Raiders 16-year-old rookie winger Ryder Ritchie fits into that department.
In his first 17 games with the Raiders, Ritchie posted two goals and five assists. During his past 20 outings with the Raiders, Ritchie has 10 goals and 11 assists. He also played for Team Canada White this past November at the World Under-17 Hockey Challenge held in Langley and Delta, B.C., and collected four goals in six games.
Ritchie, who stands 5-foot-10 and weighs 157 pounds, was selected by the Raiders in the first round and 14th overall in the 2021 WHL Prospects Draft. He comes from a highly regarded hockey family as father Byron Ritchie played in the NHL in the late 1990s through most of the 2000s with the Carolina Hurricanes, Florida Panthers, Calgary Flames and Vancouver Canucks. Byron starred for the WHL’s Lethbridge Hurricanes for four seasons from 1993 to 1997 helping them win a league title in 1996-97.
The performance of the current 17-year-old class who had strong campaigns last season might skew fan perceptions of what is expected of younger players, but Ryder Ritchie is having an outstanding season for a 16-year-old rookie. The 16-year-old rookie season is a challenging one.
Outside of a rare few who play for their hometown WHL clubs, 16-year-old rookies are learning to live in a new community and are balancing the requirements of high school studies while playing hockey at the highest junior level. In a lot of cases, the 16-year-old season is a learning campaign where you get your feet wet as you learn about life at the WHL level. The growing pains from the 16-year-old season usually help that player return with a running start to their 17-year-old sophomore season.
Ritchie currently sits fourth in Raiders team scoring and is already being looked upon to play key minutes. He is playing key minutes, because he earned that opportunity through his improvement throughout the season.
Ritchie is one of the players that can be a pillar for the Raiders this season and in future campaigns. At the moment, Ritchie is providing the type of hope Raiders fans want to see.
Currently, the Raiders sit 11th overall in the WHL’s Eastern Conference with a 16-25-3 record. They sit 11 points back of the Regina Pats (22-20-1-1) and the Swift Current Broncos (22-18-0-2) for the seventh and eighth overall and final playoff positions in the conference.
While the Raiders have 28 games remaining in regular season play, it is hard to gain ground and make up the 11 standings points to catch either the Pats or Broncos. The Raiders are still shooting for a playoff spot. That is a noble goal and one they should be chasing, but realistically, they might not get there.
With all that in mind, the Raiders still want to keep improving and strive to get to the level they want to be at in future seasons. Back in the 2016-17 season, the Raiders finished last in the Eastern Conference and third last in the entire WHL with a 21-44-5-2 mark.
In the second half of that season, the Raiders played some strong hockey even in the games that they lost. There was a sense that the core of that team could be special one day, and by the end of the 2016-17 campaign, there was a lot of optimism for the next season to come.
The 2016-17 season saw then Parker Kelly, Max Martin, Cole Fonstad, Sean Montgomery, Brayden Pachal, Spencer Moe, Zach Hayes and Ian Scott all play sizable minutes as younger players. They made up the core part of the Raiders that helped them make the playoffs in 2017-18 and create the special WHL championship season in 2018-19.
On the current Raiders, Ritchie might end up forming the core with younger players like Cole Peardon, Brayden Dube, Aiden Oiring, Grady Martin, Terrell Goldsmith, Seth Tansem and Justice Christensen that help the Raiders do special things.
The Raiders are going to get another good young player next season, when 15-year-old forward Luke Moroz joins the club as a 16-year-old rookie. Moroz, who was selected in the first round and 15th overall in the 2022 Prospects Draft, has 12 goals and 27 assists in 31 games with the Regina Pat Canadians under-18 AAA team entering play on Tuesday.
Sometimes, it is hard to see now where those young players will be in a couple of years after the Raiders take a few games on the chin. When the Raiders post victories like their 3-1 triumph last Saturday over their archrivals the Saskatoon Blades who are fifth overall in the league at 28-10-3-1, the optimism of what things could look like for the Raiders returns.
Ritchie is the obvious light that provides hope. A few more lights that aren’t as strong right now will likely become more obvious as the campaign moves on.
Bedard memorabilia already worth big money, other notes

Connor Bedard has yet to play a minute in the NHL, and memorabilia featuring the Regina Pats 17-year-old phenom centre is already selling for big bucks.
On Saturday, the Pats hosted their Nickelodeon Night, where they wore SpongeBob SquarePants jerseys in their 5-2 victory over the Swift Current Broncos. The Pats drew their first sellout crowd of the season to the Brandt Centre at 6,499 spectators.
The Pats online auctioned off their jerseys from that night with the proceeds going to the Children’s Miracle Network. The club raised $29,550 and Bedard’s jersey had the highest bid at $13,025. The jersey for Pats star left-winger and Prince Albert product had the second highest bid at $2,025.
On eBay, Bedard’s first Pats team issued hockey card with a top mint grade of 10 has sold for around $3,400 on a number of occasions. You can find a number of Bedard hockey cards on eBay for around $25, but anything that has a mint grade of 10 usually has bids starting at $1,250. As of Tuesday, one Upper Deck card from 2021-22 had a bid on it that was just under $4,700.
As for Bedard jerseys, sellers on eBay have autographed versions of his blue Pats jersey for sale in prices ranging from $998 to $2,200. Hockey Canada Bedard jerseys start at $200 for unsigned replica jerseys and go up $2,500 for an autographed jersey.
Speaking of jerseys, the Pats suspended online sales of their jerseys shortly after the WHL trade deadline passed on January 10 after it was beyond a shadow of a doubt that Bedard would finish his major junior season playing for Regina. A notice on the Pats website said the move was made due to lower inventory levels.
Anyone wanting to purchase Pats jerseys from the team’s store has to either phone or visit the team store. You can bet the low inventory levels were due to Bedard being on the team and the demand for his jersey being high.
The late Fred Sasakamoose, who was one of the first Indigenous players to play in the NHL, actually had a rookie card produced after the season he played. During the 1953-54 campaign, Sasakamoose, who was from the Ahtahkakoop Cree Nation, skated in 11 regular season contests for the Chicago Blackhawks in the NHL’s Original Six era. Parkhurst produced a Sasakamoose rookie card for its 1954-55 set. That card is a sought after collectors piece. Sasakamoose rookie cards that are given a grade of 4 for very good sell for $349 on eBay. A card with a near mint grade of 7.5 is listed at $667 on eBay. The odds of finding cards with a near mint rating from 1954-55 are extremely rare.
A total of four WHL clubs were listed in the latest CHL Top 10 Rankings that were released on Tuesday. The Winnipeg Ice were rated first, the Seattle Thunderbirds were second, the Portland Winterhawks were sixth and the Memorial Cup hosting Kamloops Blazers placed 10th. The Red Deer Rebels were an honourable mention.
You know it is the season of the 17-year-old in the WHL when three players from that age group sit in the top three for scoring in the league. Bedard leads the WHL scoring race with 81 points coming off 39 goals and 42 assists in 33 games. Zach Benson of the Ice sits second in the scoring race with 65 points coming on 25 goals and 40 assists in 38 games. Andrew Cristall of the Kelowna Rockets is tied with 18-year-old Koehn Ziemmer of the Prince George Cougars for third with 62 points. Both have 26 goals and 36 assists, but Cristall has played 36 games, while Ziemmer has appeared in 43 games. Ziemmer is NHL Entry Draft eligible for the first time this season due to his late in the year birthday occurring in December.
Darren Steinke is a Saskatoon-based freelance sportswriter and photographer with more than 20 years of experience covering the WHL. He blogs frequently at stankssermon.blogspot.com.

Raiders down Blades in second half of home and home