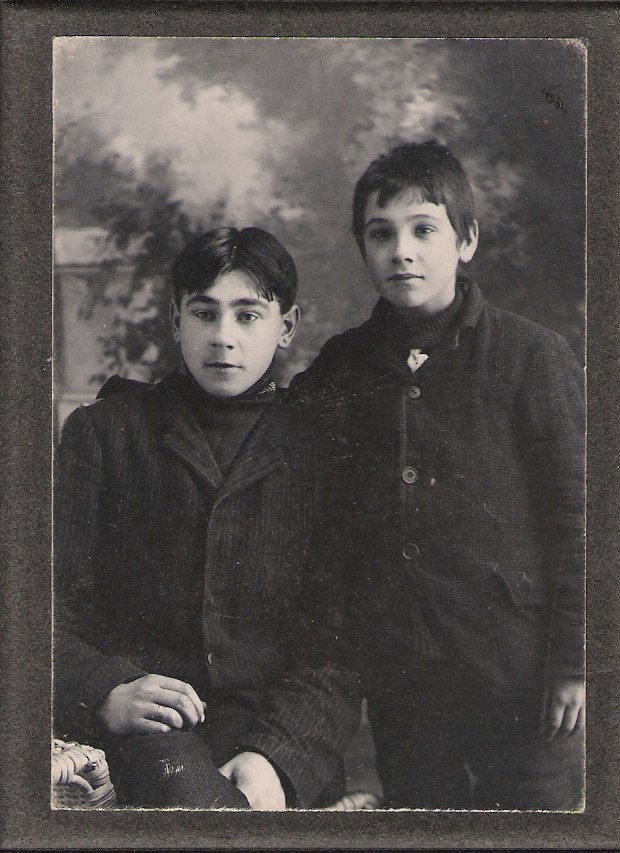 This is the fourth in a series of columns about the 70 British Home Children sent to St. Patrick’s Catholic Orphanage in Prince Albert between 1901 and 1907. While all orphanage records were destroyed in the terrible fire of 1947, every attempt has been made to trace the life stories of these dispossessed children through genealogy websites and newspaper databases

The Edney Brothers: George and Harold

EIGHT CHARGES OF THEFT – “At the police court on Thursday week, Norah Edney, the wife of a painter living at Springbourne – and the mother of two children – was charged on remand with the theft of an overcoat, the property of Francis Bros., of Boscombe. Seven other charges were preferred against her. All the alleged thefts being from various shops, and all committed on the previous Saturday. … Supt. Foster said nothing was known against the woman’s character previous to this. She and her husband were living in furnished apartments, and the woman had undoubtedly been in very hard straits for some time past; in fact, she and her family had sometimes been nearly starving, … The magistrates having deliberated, the Chairman said they must convict. … The sentence of the Court was that she be imprisoned for two months for each offence, the sentences to run concurrently.”
– Christchurch Times, 28 January 1899

Norah (Honora) Edney was the mother of George Cornelius Edney (1890-1945) and his younger brother Harold Anthony Edney (1894-1968) and their two sisters Laura and Mary. The following year, their father William Edney fell to his death while painting a railway bridge in London at the age of 42. By 7 May 1903, the boys were on board the Tunisian on their way to St. Patrick’s Catholic Orphanage in Prince Albert, Saskatchewan. George was 13 years old, and Harold was just 8.

The main course of survival for a destitute single mother in the overcrowded conditions of industrial England was to remarry. Norah never remarried, however. She had the pleasure of meeting at least one of her three Canadian grandsons who served overseas during the Second World War. William (Bill) Edney met with his grandmother several times while stationed in England. She died on November 4, 1990, in Gosport, Hampshire, England, at the age of 87.

According to Monica Plante’s history of the orphanage, when the Edney brothers arrived in Prince Albert, George immediately “absconded.” What happened after that was a mystery to me until I heard from Lloyd Edney, the 92-year-old son of George Edney. Lloyd informed me that after his father ran away, he was soon found, returned to St. Patrick’s and “caned.”

Lloyd also sent me two treasures. The first is a photo, shown here, of George (13) and Harold (8) just prior to their being sent to Canada. The second is letter written on orphanage stationery by Harold to his older brother George on 27 Jan 1908. This is the first time I have come across the “voice” of one of the 70 children I am researching. The first paragraph refers to the orphanage’s efforts to turn the British boys into farmers. “I was very glad when I heard that you were trying to get a homestead,” Harold wrote. “Brother [Courbis, the orphanage farm manager] said that he would try to keep one for you till you come. He also said that he would assist you for one year till you are able to help yourself.” The letter reveals that Harold did not learn his birth date until he was 14 years old. It also reveals that the Edney brothers remained in contact with their two sisters and their mother back in England.

On 11 September 1908, 18-year-old George applied for a homestead on land north of Prince Albert near White Star. George found the land “too bushy,” so he abandoned this piece of land on 29 November 1908. [Homestead records, Provincial Archives of Saskatchewan.]

In 1911, George was working as a labourer on a farm near Langham. There he married Anna Pauline Epp on 1 July 1913; they had two sons William and Harold, and a daughter, Dora. George applied for another homestead on 26 Sep 1914 and was granted the land on 21 Nov 1922.

Tragedy struck when George’s wife died of influenza (Spanish Flu) on 21 Nov 1919 at Langham, a month after Dora was born. He remarried on 11 Dec 1926 to Katharina Ruby Epp in Saskatoon, where their three children, including Lloyd, were born. George died on 19 July 1945 at age 55 from lung disease after working at the Canadian Government Grain Elevator. He is buried in Woodlawn Cemetery in Saskatoon.

After Harold Edney left the orphanage, he worked as a hired man on a farm near the Prince Albert. At age 19, on 29 November 1913, Harold paid his ten dollars and applied for a homestead near Steep Creek at the forks of the Saskatchewan Rivers. He received the grant for the land on 14 March 1917.

Harold married Vera Rose Szatkowski on 18 August 1920, in Prince Albert. They had five children. He died on 14 February 1968, in Albion, Maple Ridge, British Columbia, Canada, at the age of 73.