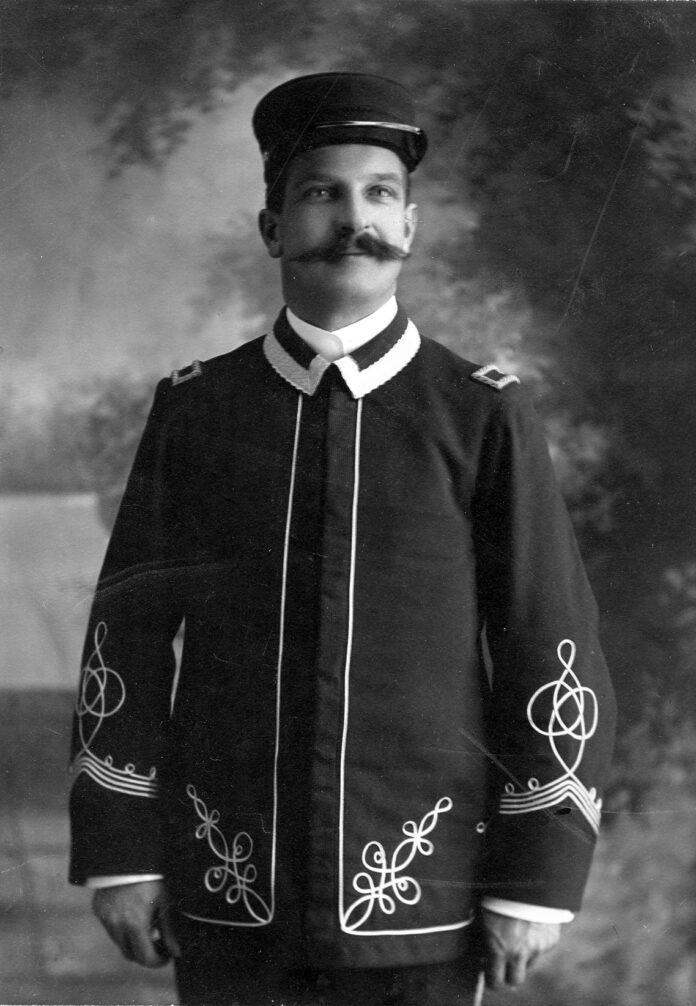 My friend Larry from up 2nd Avenue, stopped by to chat about Prince Albert bands. As a youth, he had played French horn in the Lions Band.  Some of you might remember their bandmaster, Frank Nunas.  He and his family lived on 13th Street West, almost across from Dent’s Little League Ball Park.  Frank worked at Eaton’s, when it was on Central Avenue (where the First Nations University of Canada is now located).

Back in those days, the Lions Band practised in one of the buildings the city used for recreational purposes.  These buildings, once part of the army barracks on the west hill, had been moved down near the Memorial Swimming Pool, served amongst other purposes as the change rooms for those using the pool.  I don’t remember the band practising there, but I do remember changing in one of them when our school class went swimming.  That, of course, was before they built the Rec. Centre (now the Margo Fournier Centre).

Anyway, my friend Larry remembers what a great teacher Frank was, and he still recalls their uniforms – the capes and the hats, known as shakos.  He recalls them as being purple and gold which, I think, were probably Lions club colours.

When Larry first indicated that he wanted to talk about Prince Albert bands, I couldn’t help teasing him a little.  “Bands like the Cottonpickers,” I said.  “Or how about the Ragsmen” (later known as Third From the Sun).  Lew Bell, Baldwin Malec, Wes Stubbs et al had been quite popular with the older generation when I was young.  And Bill Lamb, Jon Rowthorne, Chuck Olver and Keith Brown were the local band which really packed them in at teen dances at the East Hill hall and the Rec. Centre (now the Margo Fournier Centre).

“Or there were others”, I suggested:  the Distinguished Seven, a Tijuana Brass type band from Riverside Collegiate.  I know Bob Twyver is still around, and their drummer, Don Povey, is living in Regina.  Another local musician living in Regina is Brian Sklar who, along with individuals like Connie Amyotte, played some pretty good country and western music and entertained at places like the Cloverdale Hall.  I still recall standing in the basement of Eaton’s Department Store on Central Avenue and watching Brian pick up and play instrument after instrument.  It didn’t matter what it was, Brian appeared capable of making music with each and every instrument.  Maybe his impromptu performances were a good advertisement for the department that Frank Nunas supervised.

Actually, when I come to think about it, there was a lot of local talent about whom I could write.  But Larry pointed out that what he really wanted to talk about was bands like the Lions Band and the City Band.  Concert bands and marching bands.

The first Prince Albert band to which I have found a reference was a brass band formed in 1883 under the leadership of Louis St. Louis.  He was a clerk, working for general merchant W. R. Fish.  How large a band, or how long it lasted, is unknown, although it was still worth a mention in the McPhillips’ Saskatchewan Directory of 1888.

I think that it was in 1910, when George William Brown was installed in Regina as this province’s second lieutenant-governor, that the local City band next received some positive attention.  Our mayor (Andrew Holmes) and our Member of the Legislative Assembly (John Ernest Bradshaw) had accompanied the band for their performance at this ceremony.  The members of the band performed in uniforms which they had borrowed from members of the fire department, and received such widespread acclaim that upon their return to Prince Albert the politicians insisted money be found to fund them.  Fortunately for all involved, this request was made during a time when the city was entering into a period of economic expansion, and the Council was able and more than willing to expend the money.

By 1914, Prince Albert boasted two bands.  The City Band was attached to the 52nd Regiment (Prince Albert Volunteers) and had a band room within the armouries at 151 -12th Street West.  The bandmaster was A.C. Scroggs, and its executive consisted of a president (William M. Angus, clerk at Manville Hardware), vice-president (John H. Hallam, manager of the One Northern Milling Company), and secretary-treasurer (Arnold Taylor, clerk at the Imperial Bank).

The other band, the White Coal City Band, met and practised in the band room of the Old Skating Rink on 3rd Avenue West.  Jacob Thompson, a contractor, was the president, while Joseph Parker was the secretary.  The bandmaster was Fred Maddison, who was a clerk with a real estate and investments firm.  The drum major, whose name remains unknown, died on August 9th of that year.

After the war ended, the city was back to a single band.  They practised in the band room above Pasco Signs at 50 – 9th Street East.  Arthur Wilde, a checker with Grand Trunk Pacific freight, was the bandmaster.  The president was W.E. Bristowe, the secretary of One Northern Milling.  Fred Coates, a clerk with the Forestry branch, was the vice-president, and Sydney Blake, a letter carrier with the Post Office, was the secretary-treasurer.

In 1923 and through until at least 1925, the City Band continued to practise in the same building, although in 1923 the business on the main floor was the Gardiner Machine and Motor Company.  Arthur Wilde, now an assistant foreman for the CNR, remained as the bandmaster.  The executive now consisted of president Fred Watkins (a shipper for Codville Company), and secretary-treasurer J.D. McArthur.  Whether by default or design, the position of vice-president was vacant.  It would appear that by 1925, the main floor tenant had moved out of the building, which may have had something to do with the City Band looking for another home.

By 1929, the band had found a long-term home in the basement of the Central Fire Hall (now the Prince Albert Historical Museum).  The president was George L. Cross, an employee of the CNR, but the secretary-treasurer and the bandmaster remained the same as it had been in 1923.

Wilde continued to be the bandmaster for the City Band until the mid-1930s, when William Lamb took over.  By that time, Sydney Blake, who had become the supervisor of the Post Office’s letter carriers, was continuing to serve as president.  Blake and Lamb appeared to make a good pairing, as they remained in their respective positions until the late 1940s.

In 1950 the band, now under the leadership of acting bandmaster George Robinson, was practising in City Hall (now the Arts Centre).  William Lamb was back as bandmaster by 1952, and Robinson was filling the role of assistant bandmaster.  This arrangement continued until the mid-1950s when…

As so often happens when my friend Larry stops by for a chat, his cell phone rings, and he has to head back to work.  I will have to wait to tell him (and you) more, including about Dave Monette and his pipe and drum band.  Now that is a well travelled and award-winning band! In the meantime, why not stop by the Historical Museum and check out the old City Band tuba in the Lestock Reid Room.  From now to the end of August we are open daily from 9:00 a.m. to 5:00 p.m.  Our staff is following Saskatchewan Health Authority regulations, and we would ask that you follow them as well.  Stay safe, and stay healthy!

Museum Musings: My most memorable Christmas