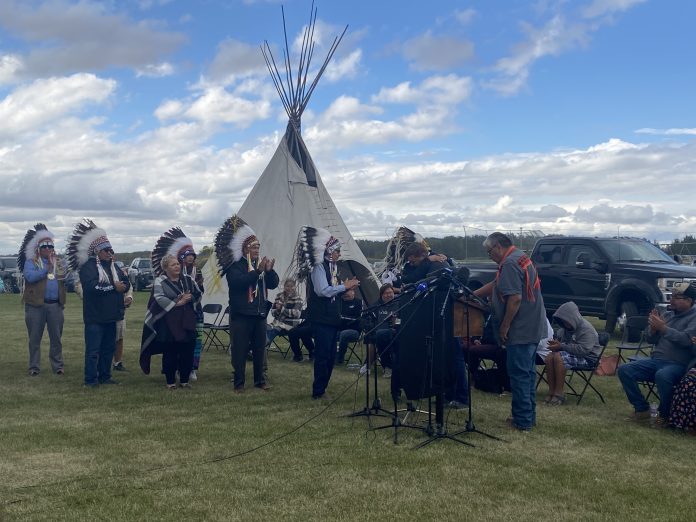 Indigenous leaders are calling for the implementation of tribal police on First Nation communities in Saskatchewan after a mass stabbing on the James Smith Cree Nation and nearby Weldon left 11 people dead and 18 injured.

Federation of Sovereign Indigenous Nations (FSIN) Chief Bobby Cameron announced that the organization would be putting a resolution forward to create a First Nation policing association during a press conference at the James Smith Cree Nation on Thursday afternoon.

“(It’s) to work in conjunction with the RCMP,” explained Cameron. “The eyes and ears at the ground level, when the response time is not quick enough, we will have our own on-reserve tribal police.

“Our young ones deserve a better life than we had,” Cameron added.

“This incident sheds light on the fractured system,” said Hardlotte. “The parole board has to be more transparent and make some fundamental changes. The justice system needs to work with our members, our leaders of our First Nations and establish, in this case, a transition period for those dangerous offenders that are within our system.”

Hardlotte confirmed that the PAGC and FSIN have been working with the federal government for the last several years to develop a legislative framework for tribal policing in Saskatchewan.

“We have much more work ahead of us,” said Hardlotte after giving a commitment to support the affected tri-nations. “We must provide for their immediate needs at hand, but we also need to address the core issues of poverty, housing, drugs and addictions underlying this violence that many of our other First Nations are also experiencing.”

Chief Robert Head of Peter Chapman Band, who’s first cousin passed away in last weekend’s stabbings, said the days following the attack made the community feel like a warzone.

“This is something that can be avoided. We need first nations justice systems, we need support for mental health, we need addictions centres,” said Head. “These are things we can do together.”

A tearful Darryl Burns talked about his sister Gloria Burns, a member of the James Smith Cree Nation Community Response Team who died while trying to save other victims of Sunday’s attack.

“One of our rules is you don’t go alone, but she went alone that morning,” said Burns. “A friend needed her help and that’s the kind of person she was.”

Burns said his family was there to forgive while he stood at podium hugging Skye Sanderson, wife of Damien Sanderson, a suspect in the attacks who was later found deceased.

“This woman shouldn’t have to bear this kind of guilt and shame and responsibility,” he said. ”That’s who we are as people, we are forgiving, loving people. That’s in our DNA.”

Sanderson spoke out on Thursday for the first time since the attacks happened, saying she also lost her father in Sunday’s tragedy.

“That’s not my husband,” she said through tears.

Chief of James Smith Cree Nation, Wally Burns, said today is the start of a long and difficult healing journey.

“Words will never describe the pain and trauma our communities have endured over these past few days,” he said. “For many people, the magnitude of what has happened hasn’t sunk in yet. Many of us are still in shock over the deaths of so many of our loved ones.”

Premier of Saskatchewan Scott Moe and RCMP Commissioner Brenda Lucki each gave their condolences to those affected by the attacks and promised to work with the communities to find long-term solutions.