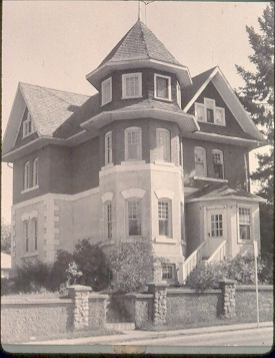 For the first eight years of my life, I lived across the back alley from a house which seemed to me at that young age to be akin to a fairy tale castle.  The house, built for the family of druggist John Stewart, was sold in 1919 to a lawyer, newly arrived in Prince Albert to enter into a practice with S.J.A. Branion.  Stewart had recently purchased the home of George Will (still known to many of us as the Colonial Apartments), whose bank had foreclosed on his mortgage after he went bankrupt due to the La Colle Falls debacle.

The young lawyer, George Braithwaite, was the father of Max Braithwaite.  Max became a teacher, and later an author.  He wrote the books The Night We Stole the Mounties Car and Don’t Shoot the Teacher, but more notably a book, Never Sleep Three in a Bed, written in part based upon the family’s life living in that house.

My thoughts turned recently to writers who, through the years, have lived in Prince Albert because of two items which had been brought to my attention.  First off, poet Douglas Elves submitted a poem from his collection Riverlines to the Historical Society Facebook page.  Spring Breakup in P.A. 1883 was inspired by merchant James Clinkskill’s observations of the breakup of the North Saskatchewan River in the year 1883.  Then, I saw some media attention for a book written by former Prince Albertan Robert Boschman called White Coal City: A Memoir of Place and Family.

I admit that I have read neither publication.  But they did start me thinking about books written by Prince Albert writers, and I decided it was time for me to include some of them, and their writings, in my column.

Elves’ book brought to mind the fact that Clinkskill, whose name was associated more with Battleford and Saskatoon, had originally settled in this community.  His move to Battleford was made for economic reasons, sometime before 1888.

Boschman writes: “I lived two blocks from the 1885 jail that was built in the aftermath of the Riel Resistance, and two blocks the other side of where I live is a residential school, All Saints, and I’m growing up right there,” said Boschman.

Given the location of the Territorial Gaol, built in the mid-1880s, was at the corner of Central Avenue and 18th Street, and All Saints Student Residence was west of 7th Avenue West, I felt compelled to locate where Boschman had lived.  Other clues in the media report indicated that he had lived in the back of a launderette and I was able to call to mind that in the time frame of which he was writing, there was such a facility on 2nd Avenue West between 27th and 28th Streets.  The Henderson’s Directory proved that I was correct, listing King Koin Lauderette at 2730 – 2nd Avenue West, which was owned by Willard Boschman.  So, Robert lived approximately two blocks west of the provincial gaol, a facility which was not built until 1923.

Another author who wrote while living here includes one of the most widely read Canadian authors, although she is most famously associated with Prince Edward Island rather than with Prince Albert, Saskatchewan.  Lucy Maud Montgomery, author of the Anne of Green Gables books lived in Prince Albert in 1890/91.  Her widowed father had remarried and brought Maud to Prince Albert to live with him, his new wife (Mary McRae Montgomery), and a half sister (Kate).  She wrote during her time here and experienced the delight of first having a piece published while living here.  The poem, about the legend of Cape Leforce, was written in November 1990 and printed in the Charlottetown Patriot.  Maud did not, however, get along well with her step-mother, nor with her school teacher (Mr. Mustard) who appeared to have a crush on her, and she left for the east at the end of August, 1891, just over a year after her arrival.

A more recent work by a local author is Connie Sampson’s Buried in the Silence, an examination of the life of Leo LaChance and the inquiry into his death.  Her 1995 book is described as “a thought-provoking examination of racism in Canadian society today” and might provide more recent insights into the “brutal racist place” which Boschman remembers from the 1960s and describes in his memoir.

Another book by a female author details some of the history of Chinese cafes in downtown Prince Albert.  This is a book by former resident Janice Wong.   Chow:  From China to Canada:  Memories of Food and Family is both a cookbook and a fascinating glimpse into local history. Janice writes about her father, Dennis Wong, who opened two Chinese-Canadian cafés in Prince Albert, and introduced countless adventurous Canadian diners to Chinese food. The book includes a collection of more than 50 simple family fare dishes.

Mary-Ann Kirkby also wrote a book with a culinary bent.  The second of her two books, Secrets of a Hutterite Kitchen, was a follow up to her award winning I Am Hutterite.  She is currently completing a third book detailing Hutterite history, but does not limit herself to the one topic.  She also wrote and published a children’s book called Make a Rabbit.

Former mayor Dick Spencer incorporated his career as an educator and a politician, when he wrote his two books.   Trumpets and Drums, which contains behind the scenes campaign details of the later John Diefenbaker campaigns, is full of personal knowledge and anecdotes from Spencer’s close personal relationship with Canada’s thirteenth prime minister.  His other book, Singing the Blues: the Conservatives in Saskatchewan, details the party’s history in the Province of Saskatchewan until its near dissolution after the formation of the Saskatchewan Party.

One of Canada’s foremost poets, Earle Birney, referred to John Victor Hicks as “Canada’s most neglected poet”.  Hicks was known as a poet, a musician, and a train aficionado.  Unofficially serving as Prince Albert’s poet laureate until his death in 1999, Hicks’ first book of poetry, Now is A Far Country, was published in 1978.  Other books included Winter Your Sleep and Sticks and Strings.  But Hicks did not write only poetry.  His works included a collection of short essays called Side Glances:  Notes on the Writer’s Craft, which earned him a note of appreciation from American author Stephen King.

For those interested in the fur trade, and the Prince Albert of the first half of the 20th century, I would suggest that you read Harold Kemp’s book The Northern Trader.  When I knew the Kemps, they lived in a house across 2nd Avenue from where the Braithwaite family had lived. Kemp’s book chronicled his years working for the Hudson’s Bay Company and contains considerable information about the early part of the 20th century in Prince Albert and Northern Saskatchewan.

A retired trapper and fisherman, Auguste Merasty’s book, The Education of Augie Merasty, tells the story of a young First Nations person who endured residential schooling.  Even though he suffered physical and sexual abuse, his poignant story is full of humour, and his warm voice shines through in his words which David Carpenter helps him to tell.  Although normally a resident of Birch Portage, Augie spent many hours in Prince Albert’s downtown core.

Childhood Thoughts and Water, by John McDonald, is a collection of freelance and beat poetry, spoken word, as well as free verse and lyrical poetry.  After growing up on the West Flat of Prince  Albert, and spending five years in the Prince Albert Student Residence (referred to by Boschman as All Saints), McDonald describes in his book how he reconnects with his culture, and the people and experiences which helped to shape him as the person he is today.

I know that there are numerous writers of a multitude of subjects whom I have not covered in this column.  I apologise if you or someone you know has been ignored.  What I have discovered, and what I hope that you will appreciate, is the extensive written word which has been produced by Prince Albertans.  It is part of the responsibility of the Historical Society’s Bill Smiley Archives to preserve this information for future generations.