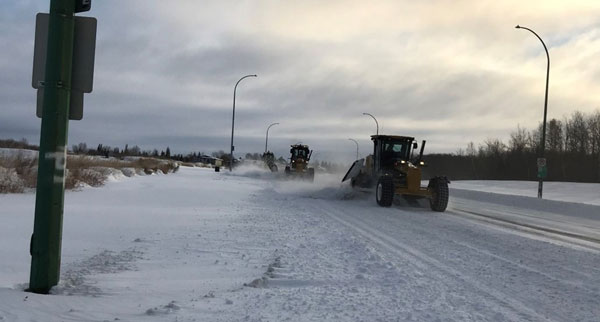 Poor weather conditions have the RM of Paddockwood urging drivers to avoid the area until crews can keep the roads clear.

RM Administrator Naomi Hrischuk said high winds are causing large snow drifts to build up on the roads, even after they’ve been cleared.

“With the high winds today we just have a lot of drifting with the amount of snow we have got,” she explained. “The snow is actually higher than the roads in some places, so now when it is drifting it is filling in and just causing more issues than it would if we didn’t have this much snow.

“We have just had such an accumulation to this point that now that any little bit of snow and any wind causes severe drifting because it is up over the edges of the road on the sides,”

According to a Facebook post this morning there were multiple vehicles stuck on the RM’s roadways. Hrischuk said RM crews are out and will be out during the weekend after the expected upcoming snowfall.

“Our guys have been out blading,” she said. “They are blading all weekend and whenever we have a wind event we are going to experience drifting.”

Hrischuk added that residents who live in the area shouldn’t have problems navigating the road, but things could be much different for people unfamiliar with the region.

“Local people understand where the drifts are and maybe people that aren’t familiar with the area don’t always know where they are,” she explained. “They just have to a little more cautious and make sure they have all their winter gear in their vehicles with them.”