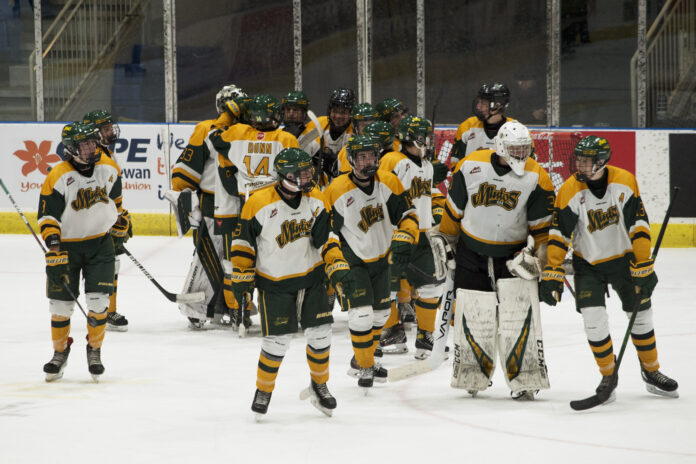 Three goals in the second and third periods propelled the Prince Albert Mintos to their third straight win, 7-1 over the Tisdale Trojans on Saturday night.

Ashton Tait and Matthew Cudmore scored twice, while Zach Bansley, Travis Swanson, and Jacob Cossette also had one goal each in the win.

The Trojans opened the scoring early when Simon Martin struck just 1:54 into the game, putting Tisdale on top 1-0.

Five minutes later, the 15 year old rookie Tait tied the game, sniping home his seventh goal of the season. The Mintos would have more chances to take the lead in the first period, but Trojans goalie Cody Wilson made some big saves to keep it a 1-1 tie after 20 minutes, making 15 saves in the opening frame.

It didn’t take long for Prince Albert to continue pouring on the pressure, as just 18 seconds into the second period, Zach Bansley let a shot go, beating Wilson, and giving the Mintos a 2-1 lead. It was his third goal of the year in his third game back with the team, after missing the start of the year with an upper body injury.

Tait added to that lead just a minute later, potting his second goal of the night just 1:16 into the middle frame, making it a 3-1 score. The Prince Albert product now has eight goals and 13 points in 11 games so far this season, leading the team in rookie scoring.

Prince Albert added one more goal in the second period, and it came from 17 year old Travis Swanson. He scored his third goal of the year, and the Mintos headed into the locker room with a 4-1 lead after 40.

Much like the second period, the third period got off to a quick start for the Mintos. Just 55 seconds into the final frame, Prince Albert’s leading scorer Jacob Cossette got in on the action, scoring goal number ten this year. He also added two assists on Saturday to go along with his third period tally.

Just six seconds after Cossette made it a 5-1 lead, Matthew Cudmore added to that lead, scoring his first goal of the night, putting the Mintos on top by five. He added another goal with 9:23 left in the game, making it a 7-1 final in Tisdale.

Despite heavily outscoring the Trojans , Tisdale still managed to put up 27 shots in the game. Jayden Kraus was solid all night on Saturday, turning aside 26 of those shots, and picked up his fourth win for the Mintos this season. At the other end of the ice, Cody Wilson was busy all night, as he faced 40 shots in the loss.

Prince Albert improved to 9-4-0-1 with the win, and sit fourth in league standings. Tisdale fell to 1-10-0-1, giving up six or more goals for the sixth time this season.

The Mintos are now off until Sunday, when they’ll visit the Saskatoon Blazers for the first time this season. Puck drop from Rod Hamm Memorial Arena is at 4pm.