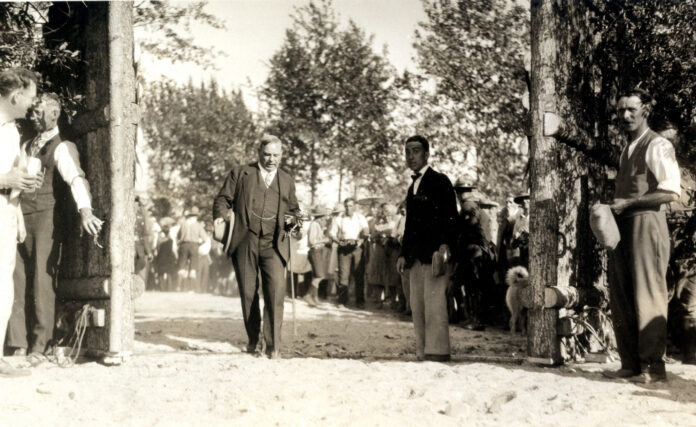 “Of the many interesting features of my present visit to Western Canada I can assure you that none has appealed to me more strongly than the prospect of seeing with my own eyes this new link in the splendid system of national parks which Parliament has set aside for the enjoyment of the present and future generations of Canadian people.”

William Lyon Mackenzie King, Canada’s tenth Prime Minister and the Member of Parliament for Prince Albert, spoke these words at the opening of the Prince Albert National Park on Friday, August 10th 1928.

King went on to talk about the first request submitted to the federal government for the establishment of a national park, and about “a more ambitious proposal” presented a year later by T.C. Davis and Charles McDonald to set aside land for the recreational needs of the people of Saskatchewan which would also attract visitors from other parts of the country, educating them with respect to northern Saskatchewan.

King noted that the newly opened park which was being developed was 1,300 square miles in size, and covered nearly thirty townships, and that it would be named after the federal constituency in which it existed. He saw significance in the fact that it was situated in an area which had seen an active fur trade, and felt that it would be a reminder of the nation’s explorers and pioneers. Perhaps, he suggested Verendrye and Frobisher had passed along the rivers and crossed the lakes, and he was sure that the air still echoed with the songs of the voyageurs.

King felt that what he had initially envisioned in his imagination had paled with respect to the extent of the park, its beauty, and the diversity of its resources. The rare charm of its scenery, he said, “can only be appreciated by one who has travelled through it as I have done today.”

When King mentioned the first request submitted for the establishment of a national park, he was very likely referring to a request submitted in 1921 suggesting that a buffalo reserve be created in the pine forest to the southwest of the city. Prince Albertans had been stung by the La Colle Falls debacle, as well as the post-war economic downturn. Aware of the popular Buffalo National Park in neighbouring Alberta, the locals felt that attracting the tourist dollar might be the way out of their debt. But when the Ottawa bureaucracy investigated the potential for such a park, they responded with a definite “no”.

Cottages in Prince Albert National Park had been erected even before the park was created. Seeing a need to protect the timber and water of the boreal forest in what is now the southern half of the national park, the federal government established the Sturgeon River Forest Reserve in 1914. The regulations of the Reserve allowed for its recreational use in specially designated resort areas, where summer lots would be made available for an annual fee of five dollars. It was not until 1924, however, that a summer cottage subdivision would be established at the area known as Primeau’s Landing along the southeast shore of what is now known as Waskesiu Lake. Even then, access to the site was difficult, and the few cottagers were lucky if they could travel the 100 kilometres from Prince Albert to Waskesiu in one day

It was not until 1925 when the matter of a national park was once again suggested by the Prince Albert Board of Trade. The establishment of a summer cottage sub-division on the shores of Lake Waskesiu (at that time still referred to as Red Deer Lake) reignited the dream of cashing in on tourist dollars. Anyone travelling to such a park, it was thought, would have to pass through Prince Albert and could be expected to spend money in the city on their way through.

It may have been a coincidence, but four members of the board’s executive held permits for these summer lots, and they felt that the establishment of a national park would result in improvements (such as better roads) which would make their situation more comfortable.

Communication with the national parks commissioner, J.B. Harkin, was accomplished this time via the office of Saskatchewan Premier Jimmy Gardiner. The response, when it came, left little hope of the local group being able to meet the federal requirements, especially since the federal government itself was faced with a very tight and difficult financial situation. This response, however, dd not deter the local group and a national park committee was formed to prepare a formal proposal.

Whether the locals would have been successful in achieving their objective is a moot question. In the general election held in October of that year, William Lyon Mackenzie King was defeated in his riding of York North, leaving the leader of the Liberal party without a seat in the House of Commons. His leadership of the party and his role as Prime Minister of Canada was therefore put at risk.

It was at this point that Charles McDonald, the newly elected Member of Parliament for Prince Albert, considered to be a safe Liberal seat, offered to step aside to allow the Prime Minister to seek election here. But King found that the safe seat came at a price. The local Liberal riding association, which included members of the Prince Albert Board of Trade, wanted a national park established around Waskesiu Lake. It was a logical request for the city that billed itself as the gateway to Saskatchewan’s north, but as previously noted there were also personal interests involved. Several prominent citizens held permits for summer lots at Waskesiu and believed that the area would receive the needed improvements only after it had achieved national park status. What really clinched the deal, though, was the prime minister’s belief that a national park would enhance his popularity in the riding and guarantee his continued support at the polls. Once King had handily won the February 1926 by-election, it was time for him to honour his side of the bargain. The Prince Albert people were not disappointed. They not only got a national park in the area they wanted, but had the deciding say in size (1,377 square miles) and name (Prince Albert) of the park, which had been established by Order-in-Council of the federal government on 24 March 1927. From the outset, Tommy Davis, the provincial MLA for the area, boldly predicted that “The Park is going to be a grand thing for Prince Albert.… It is going to preserve in perpetuity a great playground … a playground which is totally different from the prairie area of our province.”

The day of the park’s opening arrived and the unpredictable summer weather cooperated. Over 3,000 people attended, many of them driving from Prince Albert and Saskatoon, most following the road via Sturgeon Lake which had been suggested by the Park administration as the most appropriate route. Because of the lack of available lodging, those who remained overnight slept in tents which they had brought, or in their automobiles. In addition to the official opening, there various water competitions (swimming, diving, boating, etc.) and games such as pillow fights, jitney dancing, and a beauty contest.

The Prime Minister expressed his delight when presented with a cottage built and furnished for him by the people of Prince Albert. He was also impressed by the lobstick ceremony, an Indigenous tribute which indicated that the chief, or leader, was present in his home community. After spending the night in his new cottage, King left his constituency and headed back to Ottawa to attend to national and international matters, including appending his name to the Kellogg-Briand Treaty (officially the General Treaty for the Renunciation of War) which was signed on August 27th, 1928 at Paris, France.

Regardless of the machinations which brought about the creation of Prince Albert National Park, it can be seen to have achieved the objectives identified upon its opening:

“In the building of Canadian national life, and in the molding of our national character, it is of the utmost importance that we should cultivate an appreciation of all that is beautiful in our physical environment.”

Historical Society volunteers preserve our past