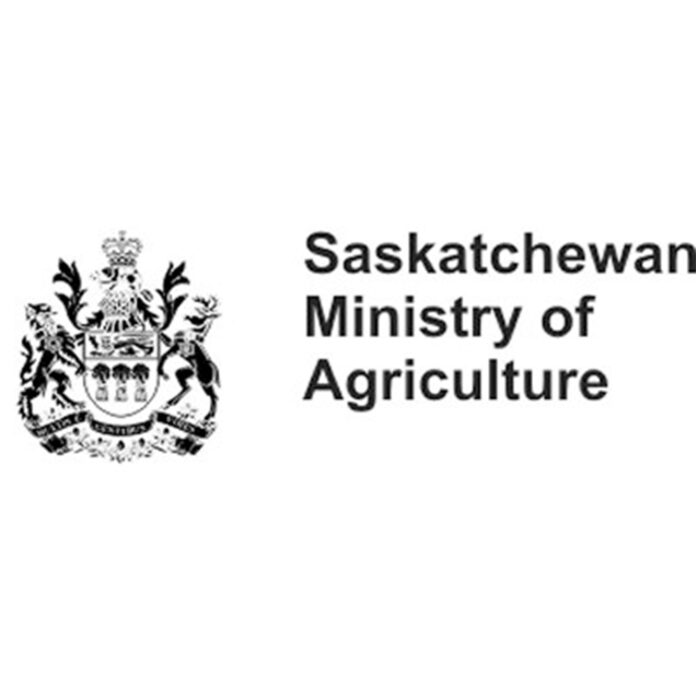 Rainy, cool weather throughout the province delayed combining progress this week. Harvest progressed to 29 per cent complete, up from 20 per cent last week and well over the five-year average of 12 per cent. An additional 21 per cent of the crop is now swathed or ready to straight-cut, ahead of the five-year average of 16 per cent. Producers would have rather had rain during critical stages of the growing season, but were happy to receive significant amounts of it this week.

Several large weather systems moved through the province last week, resulting in significant amounts of precipitation along with hail in some areas. The Grenfell area received the most rainfall with 97 mm, the Moose Jaw area 77 mm, the Vanguard area 60 mm, the Jedburgh area 55 mm, the Harris area 50 mm and the Nether Hill area 46 mm. The rain will result in downgrading of crops still in the field; however, it will benefit pastures and hopefully allow them to regrow for next year.

The majority of crop damage this week was due to wind, heavy rainfall and hail. Even with the rainfall, crop and pasture land is under extreme stress from the drought. Around the Hodgeville area, a tornado touched down and resulted in considerable damage to one farm yard, damaging equipment, buildings and grain bins.

Producers are busy getting equipment and bins ready for harvest and waiting for crops to dry enough to combine.

In response to the drought, the province announced an AgriRecovery response to provide a per head payment to help maintain female breeding livestock. Details and information on how to apply are being finalized and will be shared as soon as possible. Note that producers don’t have to be enrolled in any existing programs to qualify for funding. As details are finalized, producers can check Saskatchewan Crop Insurance Corporation (SCIC) for updates, or contact their local office or call toll-free at 1-888-935-0000.

Producers are also reminded that in response to the feed shortage this year, SCIC doubled the Low Yield Appraisal threshold values for customers who salvage their cereal or pulse crops as feed, without negatively impacting future individual coverage. Customers are asked to contact their local SCIC office before they graze, bale or silage any damaged crops to discuss their options.

Additionally, the Government of Saskatchewan made changes to temporarily increase the maximum funding a livestock producer can receive from the Farm and Ranch Water Infrastructure Program (FRWIP) for dugouts, wells and pipelines for agricultural use. Producers can contact the Ministry of Agriculture’s Agriculture Knowledge Centre at 1-866-457-2377 for information.

The federal and provincial governments have also increased the 2021 AgriStability interim benefit payment percentage from 50 per cent to 75 per cent for Saskatchewan producers. The interim benefit provides the opportunity for producers enrolled in AgriStability to access a portion of their benefit early, to help support losses and cover costs. To apply for an interim benefit, producers can contact their local SCIC office, call the AgriStability Call Centre toll-free at 1-886-270-8450, or by email agristability@scic.ca.

The majority of crop damage this week was due to heat and lack of moisture in most areas of the region. Strong winds storms blew some swaths around and likely shattered pods of ripe crops.

Producers are busy combining getting bins ready for harvest as well as swathing and desiccating crops in some areas. Fire risk is high and many producers are taking action to prevent them.

Areas around Mayfair received the most rainfall this week, reporting 60 mm. The Speers area received 38 mm, the Turtleford area 22 mm, the Pierceland area 16 mm and the Barthel and Meadow Lake areas nine mm. The rain is welcome but there are concerns about crop downgrading.

Pasture conditions in the region are rated as nine per cent fair, 44 per cent poor and 47 very poor.

The majority of crop damage this week was due to wind, dry conditions, hail and geese. Standing or swathed crops might see a downgrade due to rain.

Producers are busy hauling grain, getting bins ready, moving cattle to fields to stubble graze and waiting for conditions to improve and combining to resume.