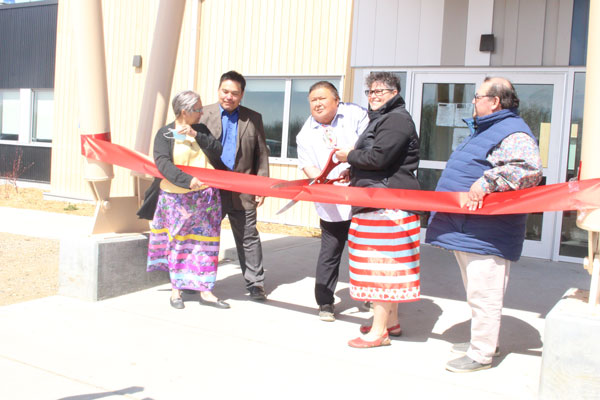 A new home has officially opened for the White Buffalo Treatment Centre.

Dignitaries were on scene for the opening ceremony at Muskoday First Nation Monday morning. The treatment centre was originally located at Sturgeon Lake First Nation, but left for Muskoday in 2017 before opening in a temporary space in May 2018.

“Now our girls have a place that they can be safe,” Pruden said. “They can grow. They can heal, because there is actual space.”

Pruden represents the Battlefords Tribal Council on the board. Every tribal council in Saskatchewan is represented on the board of directors.

Pruden said the facility will offer healing using cultural practices for those the staff and the board members call ‘their girls’.

“(It’s) just (a place) for them to be a family,” Pruden said. “They become part of our family here, so now we have a home to do that in.”

The space is a large change from the former portable buildings they were using. The new building includes a gymnasium, better lighting, more space and more windows.

Including a courtyard in the design was one of the major discussions they had with the contractor.

“We wanted an outside space that was safe because as you know there is a highway there,” Pruden explained. “We are dealing with girls. They come with a lot of issues and so we want a space where they can safely be outside where we can get light.”

The new facility has space for 10 people, although the board only has funding to house 10. The program takes in girls from all over Canada.

Pruden said that the program really began with solvent abuse issues on First Nations in the 1990s. She said it uses cultural practices to address those issues.

“Their stay is four months when they are with us,” she explained. “A lot of our programming is based on culture, so we get back on the land. A lot of them have been disconnected from culture. Even though this might not be their traditional territory we teach them our ways here, and they can learn and bring that back home to their own places.”

“(It’s) just a lot of different ways for the girls to reconnect with who they are, their culture, (and) figure out what they need to do in order to grow and heal,” Pruden said.

The facility has four elders: Don Gamble and Freda Gamble, Florence Allen and Doug Allen, who did the opening and closing prayers for the ceremony.

Pruden said the elders are there every day to start the girls off with a prayer and a smudge.

“That wakens up another part of them I think that has been lost,” she said.

Pruden explained that people wanting to use the facility can apply, but they also have an outreach worker who goes across the nation to talk about the program.

“Different places know if you want a female specific place, we can get them into here,” Pruden said.

“Most people come with an addictions worker, so they have done some of that work. They are treatment ready—as treatment ready as they can be at that age—and then they have to go through certain medicals.”

Chief Ava Bear of Muskoday was on hand for the ceremony and a short tour. She was impressed by what she saw.

“What I have seen is very nice,” Bear said. “It just gives hope that there is more culturally sensitive programming for the young ladies that attend here. It’s really uplifting.

“I think we need more of them, but this is a good start. There are others like it across Canada and so a few more wouldn’t hurt. There are all kinds of addictions these days. It’s very prevalent all over, not just in our community.”

During her speech, Ava Bear credited the work of her predecessors, Austin Bear and Herman Crain, who started the partnership between Muskoday and the White Buffalo Treatment Centre.

Ava said there was local labour involved in construction and, and said the facility will also help employ local people through positions like social workers, cooks and laundry.

Colleen Rudderham the former director who retired in December 2021 and stayed on part of the Project Management Team, is from Muskoday.

“It’s peaceful and tranquil and I think that helps in calming people down,” she explained. “I think it’s the right setting for it.”

Pruden, Bear and the members of the board of directors performed the ribbon cutting ceremony after an honour song by Mina Peyak.

In her speech, Pruden saluted Rudderham’s persistence in getting the project started and seeing it almost to completion.

“It really is an honour to see something, a lot of times when we are sitting in our offices in Ottawa we see proposals go through and we see ideas and when you can come and see an idea that has been developed and is now opening it is so special for us to think of what all of you have gone through to make this a reality,” she said.