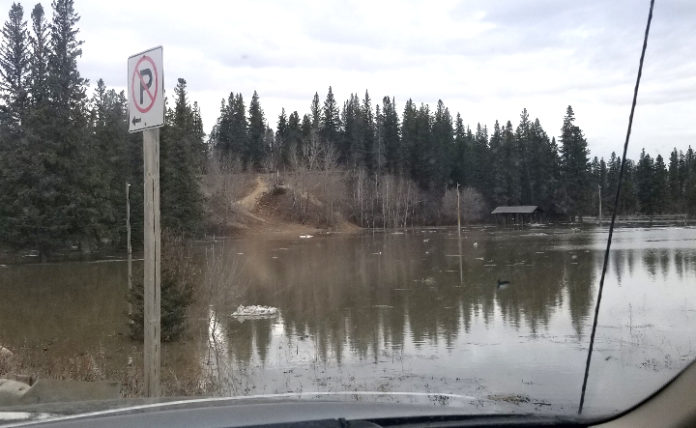 After taking a month off from regular RM council meetings the Rural Municipality of Buckland held their first meeting in a month on Monday, May 11. A flood event in late April when the South Saskatchewan River rose flooded some areas of the RM and the council had to deal with that and finances arising from it.

After their meeting scheduled for early April was cancelled, the RM experienced a washout of the Buckland Bridge and flooding in the Shell River Heights area.

“Actually we discussed a little bit about the Buckland Bridge. We talked about the flooding that took place It was just sort of a meeting because we didn’t have a meeting the month be- fore. So we were just getting financials in order,”

“The agenda was full but it was really more housecleaning than anything. e biggest item that came out of the meeting was the bridge and the berm,” Fyrk said.

Fyrk explained that April was not very eventful besides day-to-day operations and the meeting itself was more about the budget.

“It was just to get all of the finances in order,” he said.

The RM is planning another budget meeting for Monday, May 25 to further discuss the municipalities upcoming and keeping taxes low for ratepayers.

The flooding exposed a problem with a berm in Shell River Heights.

“We have got to rebuild a berm. It is a berm that is there already but we want to enhance it so there is no more flooding in that area. We have got to protect the people down in there,” Fyrk said.

“We are having our budget meeting because we don’t want to raise taxes if we don’t have to. So we are trying to

hold the taxes back and we are going to go over thing with a fine tooth comb and just see what the heck we can come up with. ere are some jobs that have to be done that were unforeseen so it is going to be nip and tuck,” Fyrk said.

The recently announced infrastructure stimulus package includes culverts and bridges but Fyrk was not aware of the commitment from the province touching Buckland.

“They can announce what they want to give you all they want but whether you get it or not that’s another story. It would be nice if they paid for a new bridge for us holy smokes, but we’ll wait and see,” Fyrk said.