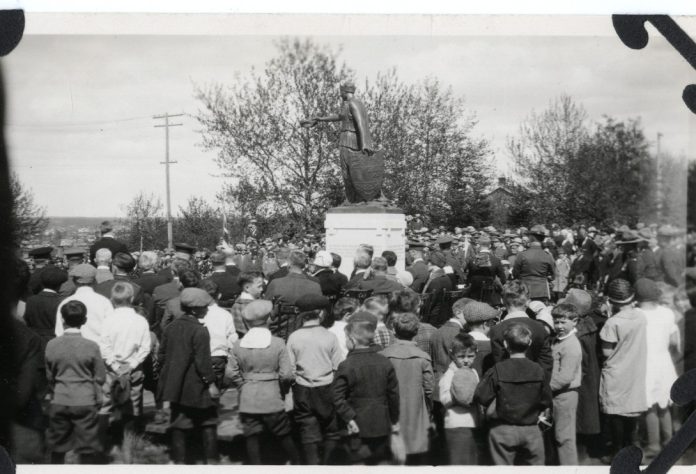 The first three years of World War II were dark and terrible. There were times when it looked like the Allies would be unsuccessful in defeating Hitler. However, in 1943, after the stubborn defense of Stalingrad and the successful invasion of North Africa, prospects became increasingly better for a second front being opened in Europe. Hopes were raised that some day the terrible war would end in an Allied victory. People began to look forward to a new and better Canada. The Marsh Plan for our nation was widely publicised and discussed. People began to think about and plan for victory and about the return of our troops.
In Prince Albert, Brigadier General Ross and Major McKay addressed the local citizens regarding the problems which could arise when our troops returned. This led Mayor George Brock to empanel a Reconstruction and Rehabilitation committee of ten individuals under the leadership of Mr. Harry Mitchell to address these concerns. The committee prepared a lengthy report on public, municipal, and district development projects. The report was submitted initially to the provincial government, and eventually to Prime Minister MacKenzie King.
In January of 1943, under the chairmanship of Walter Whelan, the Rehabilitation Committee met to determine what could be done for the veterans returning from the war. The federal government had found it necessary to establish a Department of Veterans Affairs which would be responsible for Rehabilitation and Pensions, but many of the problems of aiding the discharged veterans would have to be addressed by the citizens of the communities to which they were returning. So, the local committee set to work with nothing to its credit but the good will of the community and the cooperation of its members.
The first problem would be a reception for the returning men and women when they arrived at the railway station. It was determined that this could only be handled by building a “welcome hut” at the railway station. The City donated 150 dollars, and various merchants donated materials, while others gave of their labour. Johnny Puckett, a veteran of World War I, was secured as the hut supervisor, and the hut was officially opened by Mayor Brock on Sept. 25, 1944. Thereafter, the hut operated daily. Three times a day trains were met, and tokens of appreciation were given out. This welcome package consisted of cigarettes, a meal ticket, a theatre ticket, and a chocolate bar. Transportation to the returnee’s home in Prince Albert was also offered. This was no minor matter, given that gasoline rationing was still in existence. No matter the weather, the time of the train’s arrival, or the number of returning veterans, be it a single person or a large group, the train was met, and any help required was provided.
For those returning to homes outside of Prince Albert, the committee established the Beaver Lodge, utilising accommodation available in the former Immigration Hall which stood a short distance from the station across 15th Street. Beds, bedding, and furniture were obtained, and the Lodge was officially opened on May 24th, 1945 (although it had often been utilised before that date). The Lodge also offered men a bath and an opportunity to clean up after their journey home. Arrangements were also made for the returning women, who were accommodated at the Y.W.C.A. on First Avenue West and 14th Street.
Between September 1944 and August 1946, over 3,000 men and women were welcomed at the hut. Most of these men were greeted by Johnny Puckett, but no one arrived without being greeted. More than 1,600 men were accommodated and taken care of at the Beaver Lodge. Clean linen and hot water were always available. Mr. Archie Davidson, the building’s caretaker, supervised these lodgings, and his wife made up the army cots as required, even when they were required late at night or early in the morning.
Personal services were provided to many returnees and members of their families. Over 700 letters were written alone by the chairman, Walter Whelan, on their behalf.
Other work completed by the committee included preparing and submitting resolutions to the federal government regarding the need for a local Veterans Affairs office, a vocational training school, a military hospital, and a variety of other concerns such as housing, farm machinery requirements, civil service preferences, superannuation, and pensions.
As we near the annual commemoration of our nation’s participation in wars and conflicts around the world, once again each of us should take the time to reflect on the tremendous sacrifice that so many Canadians have made to protect our liberties and freedoms. Although our country’s men and women have continued to serve in military conflicts through the years since the middle of the 20th century, there is a tendency for us to focus on the sacrifices made by Canadians in the First and Second World Wars, and to a lesser degree in the Korean conflict. Whether this is due to the numbers of Canadians who served in such great numbers during these wars, or due to some other reason, I am uncertain. But as we take time on Nov. 11 to honour those who have served, let us remember all the Canadian service men and women who have given of themselves throughout the years, including those who have served more recently.
The Prince Albert Historical Society encourages you to join with us in honouring the men and women who have served in our armed forces. We will be open during the afternoon of Remembrance Day from 1:00 p.m. until 4:00 p.m. There is free admission that afternoon. You are all welcome to join us.
fgpayton@sasktel.net

MUSEUM MUSINGSSUMMER TIME AT THE MUSEUMS