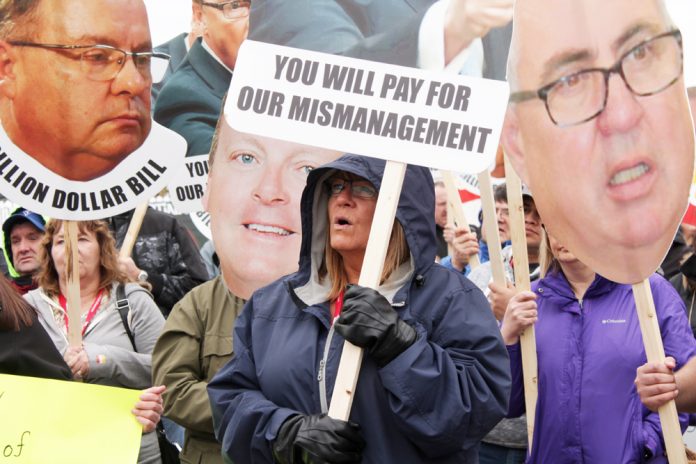 This province’s left wing has a problem.

That became evidently clear last Friday with the protest outside Minister Hargrave’s office.

It’s not the protest itself we took issue with – protest all you want. That’s your right, and it’s clear the government is listening. Look at the announcement from yesterday, where the Sask. Party announced it would reverse its cuts to the library system.

This is the second item they walked back, as they previously reduced the grants in lieu of taxes cuts to no more than 30 per cent.

So no, we have no issue with protests.

But some of the chants of Friday’s demonstration were of the very kind the left wing decried months earlier.

Shouts of “lock him up” and other charged rhetoric accusing politicians of breaking the law and only acting in their best interests, as well as name calling and other nasty comments – these are the same things we saw directed at Hillary Clinton, and at Rachel Notley.

It was wrong then and it’s wrong now.

If you have ever met with Joe Hargrave, you’ll know he’s a kind man who cares deeply about his job. He genuinely wants to make things better for P.A.

Also, he’ll genuinely listen to issues people have, and engage in a conversation, so long as that conversation is genuine.

What isn’t helpful to the political debate are those chants and that name-calling.

It does you no good to portray your point if you come across as nothing more than an angry mob, and then act superior to those who disagree with you.

No, the only way to get things done is through respectful discourse and real conversations. People will listen to you if you seem reasonable and approachable, but not if you’re hurling insults.

In an already politically polarized province, with two parties on opposite extremes and nothing for those who lean more towards the middle, this won’t help build any kind of consensus.

This kind of emotionally-charged rhetoric won’t help us move forward or work towards any solutions.

Protest, complain, put up a stink. But make sure you don’t come across as trying to be superior to others. And at least attempt to keep the rhetoric reasonable.