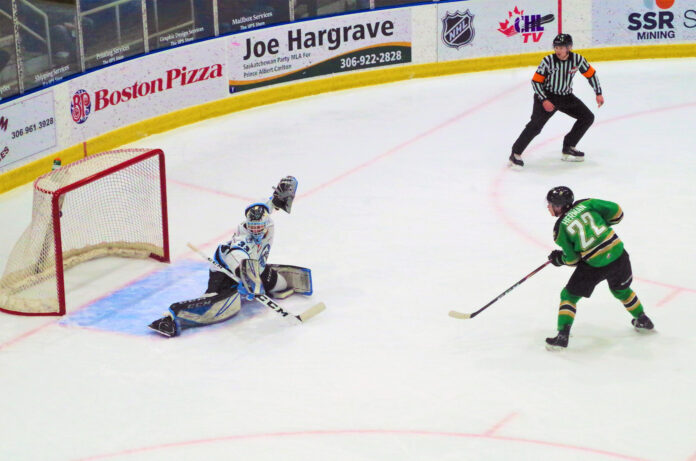 The Prince Albert Raiders led wire to wire on Tuesday night, as they took down the Winnipeg Ice 4-1 at the Art Hauser Centre.

The Raiders have now beaten the best team in the WHL twice, something that only they can boast.

“Our guys played great,” Raider head coach Marc Habscheid said. “They played really hard and they played as good of a team game we’ve played all year. Winnipeg is a difficult team to play against. They’re number one in Canada. You expect your best players to be your best players, and they accepted the challenge.”

Landon Kosior opened the scoring 3:03 into the game with a shot from the right circle. With time to shoot, Kosior walked in and ripped the puck far side past Gage Alexander, putting the Raiders up 1-0 early.

After a long stretch without a whistle following Kosior’s goal, Ice forward Conor Geekie was sent to the penalty box for slashing. After a media timeout, the Raiders got to work on the powerplay.

Winnipeg cleared the puck back into Prince Albert’s end, but Nolan Allan spotted a streaking Evan Herman. Herman received the pass, broke past the Ice defenceman and had a breakaway towards Alexander. Herman put a nicely placed shot over his glove and in, giving the Raiders a quick 2-0 lead 10:47 into the game.

“I liked the way our group played tonight,” Herman said. “It’s a good win for us and really happy with the way everyone played.”

With five minutes left in the first, a mad scramble ensued in the Raider crease. Tikhon Chaika made two saves on Connor McClennon-the last one while McClennon was on his backside, but Owen Pederson batted the rebound in making it a 2-1 score.

The Raiders took the 2-1 lead into the second period, but trailed in shots 9-7.

Prince Albert killed off a huge 5-on-3 powerplay in the second period. After Niall Crocker went to the box for interference and Ozzy Wiesblatt took a slashing penalty, the ICE set up some great looks while up two skaters. Chaika made some huge saves, including one on Matthew Savoie, keeping Prince Albert in the lead. Savoie was served an interference penalty later in the play, negating the powerplay.

With 8:44 left in the second, the Raiders had an odd man rush into the Winnipeg zone. Herman slipped a pass across for Carson Latimer, and he tipped a shot on goal that Alexander made a terrific pad save on. However, the rebound was laying right in front of the yawning cage for Herman, who followed the shot and tucked away in his second goal of the night for a 3-1 Raider lead.

“I thought all game we didn’t give them much,” Habscheid said. “They’re a team that likes playing off the rush. Our guys did a good job of taking some things away from them, and all credit is due to our players. We took space away from them and made them play through traffic and made it difficult.”

With 2:07 left in regulation the Ice pulled Alexander, which didn’t last long, as Evan Herman stripped a puck free and broke down the ice all alone, netting his third goal of the game. The Raiders went up 4-1 on Herman’s first WHL hat trick.

“It feels good,” Herman said about his three goal performance. “I couldn’t do it without my team. The first goal there was a great pass up the middle. (Laventure) drove the net hard, pulled the defence in and it was laying there, and then the empty net was nice too.”

The Raiders improved to 11-13-1-1 with the win, and in as tight of a division as the East is, Prince Albert knows they have to keep putting points together and climbing the standings.

“We’re a good team,” Herman added. “We have a room full of good guys and it’s a brotherhood in there. I know the break is soon but we have two more (games) coming up here and they’re big points. We want to get a couple more wins here before the break.”

Those two games will be against the Saskatoon Blades in a home and home set before the Christmas pause. The Raiders will host the Blades on Friday night, before heading to Saskatoon for the rematch on Saturday. Puck drop for both contests is 7pm.