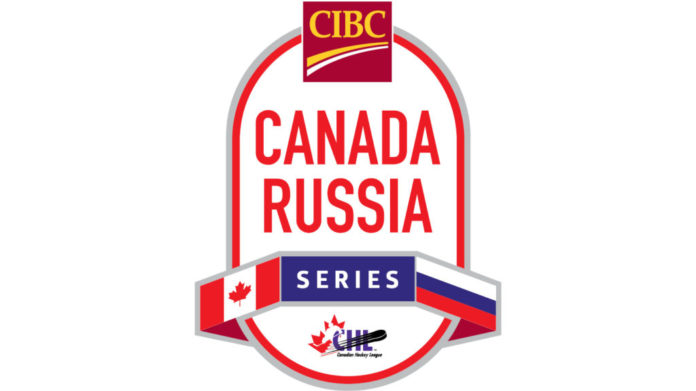 The Art Hauser Centre will host some of the best Canadian-born players in the Western Hockey League and those vying for a spot on Russia’s team at the World Juniors next season.

It was announced on Thursday by the Canadian Hockey League that the final game of the 2019 CIBC Canada Russia Series will be held in Prince Albert on Thursday, Nov, 14.

Parker Kelly, Brett Leason and Ian Scott all suited up at this year’s tournament, with Leason and Scott going on to play for Canada at the 2019 World Juniors in Vancouver.

Saskatoon will also serve as a host venue for the tournament on Wednesday, Nov. 13, as the WHL will compete in the final two games of the  series.

The QMJHL will kick things off on Nov. 4 and 5 with contests in Saint John and Moncton, N.B., while the OHL team will compete in Kitchener and London on Nov. 7 and 11.

Brett Leason and Aliaksei Protas are both among the top 50 draft-eligible skaters playing in North America according to NHL Central Scouting as they released their year-end rankings Monday.

Leason, who has been passed over twice at the NHL Draft, dropped from  17th in the mid-season rankings to 25th as he was surpassed by rising prospects such Brayden Tracey of the Moose Jaw Warriors and Bobby Brink of the USHL’s Sioux City Musketeers.

Protas also made a big jump as he improved from 77th to 44th.

He’s the second highest import player from the WHL on the list, as Finnish blueliner Lassi Thomson of the Kelowna Rockets came in at 15th overall.

Prince Albert Mintos alumni Logan Barlage, who just finished his second season with the Lethbridge Hurricanes, moved up from 211th to 188th.

Humboldt Broncos blueliner Chase Felgueiras, who was drafted by the Raiders in the 6th round of the 2015 WHL Bantam Draft, was ranked 179th overall.

Okotoks Oilers forward Quinn Olson, who was a 6th round pick by the Raiders in 2016, shot up the rankings from 154th to 105th.

Olson, who has committed to the NCAA’s Minnesota-Duluth Bulldogs, had his rights dealt to the Calgary Hitmen at this year’s trade deadline for Bryce Bader, who never played for the Raiders.

Jack Hughes of the US NTDP remains the top ranked North American skater, while Bowen Byram of the Vancouver Giants is the highest ranked defenceman in second.

Spencer Knight of the US NTDP is the top ranked North American goaltender, with Mads Sogaard of the Medicine Hat Tigers right behind him.

The 2019 NHL Draft will be held in Vancouver on June 21-22 and will see the New Jersey Devils holding the first overall pick.

Canada undefeated at World Under 18’s

It’s been a perfect start so far for Canada at the World Under 18 Hockey Championship in Sweden.

After a wild 5-3 win over Finland Thursday, Canada improved to 2-0 with a 7-4 triumph over Switzerland Friday.

Moose Jaw Warriors forward Brayden Tracey led the way in both games, as he had two goals and an assist on Friday after scoring twice on Thursday.

Thomas Harley (Mississauga Steelheads), Connor Zary (Kamloops Blazers) and Peyton Krebs (Winnipeg Ice) had a goal and an assist each against Switzerland.

Krebs had a goal and an assist against Finland, which also saw goals from Jamieson Rees (Sarnia Sting) and Alex Newhook (Victoria Grizzlies) as Gauthier turned aside 39 shots.

Prince Albert product and Brandon Wheat Kings blueliner Braden Schneider has yet to record a point at the tournament.

Following an off day Saturday, Canada will return to action on Easter Sunday against Belarus.

They will conclude their round-robin slate on Tuesday against the Czech Republic, with the playoff round getting underway Thursday.

All of Canada’s games are being televised nationally on TSN.