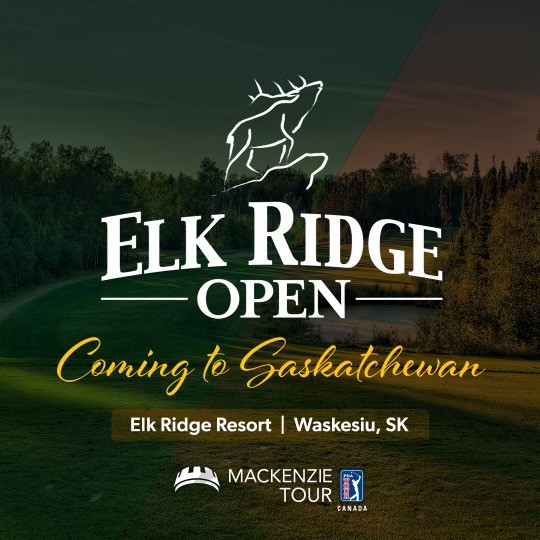 The Elk Ridge Resort will soon be welcoming the top players from the Mackenzie Tour – PGA Tour Canada circuit.

In a press conference on Tuesday morning, it was announced that the Elk Ridge Open will take place at the Waskesiu facility for the next eight years, with the first event taking place from Sept. 6-12.

“Way back when, this was really just an idea and a concept that we took to our ownership group,” managing partner Ryan Danberg said. “To their credit, there wasn’t one person that said we shouldn’t try this.

This year’s competition will be feature Canadian players as a result of COVID-19 pandemic and the current Canada-United States border restrictions.

It is expected that the 2022 event, which will run from June 20-26, will feature a full field of Mackenzie Tour competitors.

“Our event in September will be a sneak preview of sorts to the full-blown event we’ll see over the next several years,” said Hugh Vassos, president of VMC Sports and Entertainment who will serve as the host organization of the event.

“We have a lot of huge plans for the event as we plan to involve junior golfers, events as Waskesiu, qualifiers and pro-ams. We’re going to try to have this look and feel as much as a PGA Tour event as we can.”

This marks the first time that the Mackenzie Tour has visited the province since 2016, when the Dakota Dunes Open wrapped up a nine-year run at the Dakota Dunes Golf Links just south of Saskatoon.

It’s also the biggest golf event to be held in the province since the 2018 CP Women’s Open at the Wascana Country Club in Regina, which was won by Canadian golf star Brooke Henderson.

“As we come out of the pandemic, we talk a lot about what we can do to help the economy, our community, and what we can do with our family and friends,” Premier Scott Moe said. “What better way to do that than to gather around world class sporting events that we are lucky enough to have access to here.

“It means so much to our province to have these top golfers come here and to have the opportunity to show off a beautiful part of our province and the great people of Saskatchewan.”

It was also revealed during Tuesday’s press conference that current PGA Tour player and Mackenzie Tour alumni Graham DeLaet of Weyburn will serve as the tournament’s honorary chair.

“I think when a lot of people think about farms, wind and wide-open spaces,” DeLaet said. “It’s so beautiful up at Elk Ridge and Waskesiu and I think it’s going to show a different side of Saskatchewan than the common stereotype that most have of our province.

“I think the tournament’s going to be a real test that the golfers will enjoy, especially with it being in early September. The leaves are starting to turn and you have that little bite of cold weather, which might toughen the guys up and show them what us prairie boys are all about.”

Full details on tickets for the tournament and the ability to volunteer at the event will be posted on the event’s social media pages in the coming weeks.

While the field itself has yet to be finalized, it is known that Kelowna, B.C.’s Trevor Bloom has earned an exemption into the tournament after winning the Fountain Tire Men’s Lobstick tournament at the Waskesiu Golf Course on Saturday.

“I’ll definitely be back for that,” said Bloom, who grew up in Canwood. “I might have to work it around my family’s harvest though as that’s usually the time I come back to help them out on the farm.