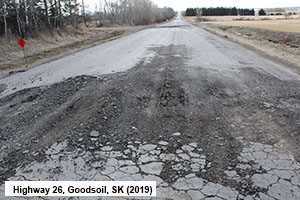 After taking a year off due to the COVID-19 pandemic, the CAA Worst Roads campaign is returning in 2021.

The campaign runs from April 7 to April 27. Everyone can cast their worst roads vote at the CAA Saskatchewan website caask.ca/worstroads. The Top Ten Worst Roads will be revealed on April 28.

“The purpose of CAA’s Worst Roads campaign is to help highlight problems and dangerous road conditions in the province, and to encourage decision makers to address those most in need of improvements,” CAA director of corporate communications and public relations Christine Niemczyk said in a media release. “Working towards better roads and safety for all road users is a priority for CAA Saskatchewan.

The Google Map Locator is the newest addition to this year’s campaign. The locator will show vote distribution across the province, and pinpoint the locations of the roads getting votes. Weekly news releases will be provided by CAA listing the current top ten worst roads, as well as updated Google Map Locater results.

The CAA will accept photos of any roads nominated. They advise residents to take photos in safely.

Very poor conditions are defined as roads with health and safety harzerds that are a risk to public safety. These roads need major repairs or immediate replacement. These roads typically have less than 10 per cent of their expected service life remaining.

Saskatchewan residents cast 1,514 votes during the 2019 campaign. Six of the top 10 worst roads were streets in Regina. The campaign ran from April 17 to May 8.

Tied with Catherwood Crescent, Regina and Saskatchewan 795 between St. Walburg and Livelong