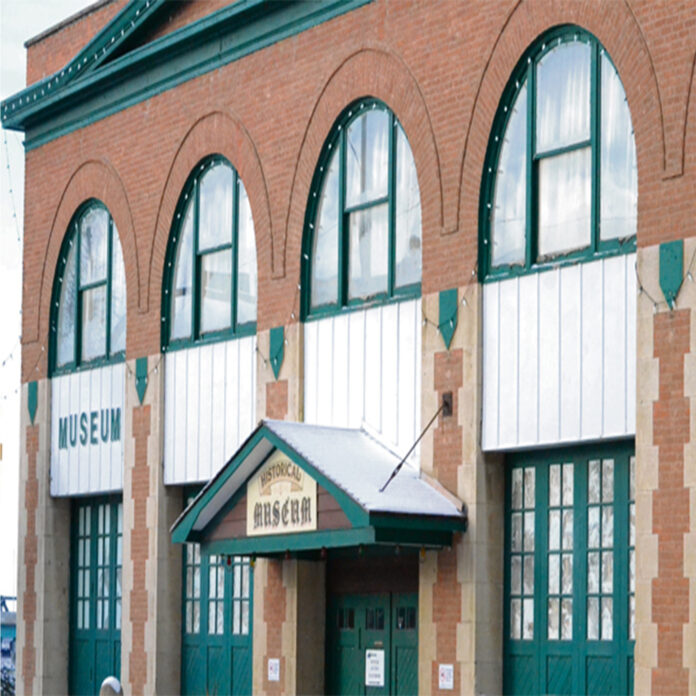 As I write this column, we are fast approaching the end of another year.  Like many, it is a time when we look back at what we have accomplished, and those things which have been left undone.  As we did in 2020, the Historical Society again has had to cope with COVID-19 in 2021.

Remember the old adage about every cloud having a silver lining?  Well, we have found that to be true for us during the pandemic.  When it was problematic for people to visit the museum, we needed to be creative with respect to show-casing our artefacts and archives.  As a result, we were able to engage many more people both locally and in distant communities through Zoom tours, our school suitcase programme, and most notably via Instagram and Facebook.

In fact, our current reach for monthly social media posts is now approximately 1.3 million people.  A comparison of our Facebook base is unrivalled by other communities of our size, and even those which are much bigger.  For example, the Western Development Museum, a provincial museum with locations in Saskatoon, Moose Jaw, Yorkton, and North Battleford, has under 5,000 likes and slightly more than 5,000 followers.  The Galt Museum in the Alberta city of Lethbridge, a community with a population of 100,000 people, can boast fewer than 6,000 likes and under 7,000 followers.  We have over 8,670 likes and more than 9,000 followers.

The success of our social media can be attributed to our Museum Educator, a position which the Historical Society determined as necessary and therefore has funded for slightly more than three years.  Our ability to manage the funding is a result of the capable and competent fiscal management of Michelle Taylor, our curator and museum manager.

The Museum Educator initiated such theme days as Trivia Tuesday, Throwback Thursday, and Femme Friday.  Some of the posts which reached the most people this year included a posting showing front page articles from the December 16, 1918 Prince Albert Daily Herald.  Over 43,000 persons were reached by that posting.  Another 26,250 people were reached by the posting on the January 8th Femme Friday posting featuring Dr. Lalita Malhotra, and over 20,000 people were reached with the December 7th posting showing the railway bridge when it was still capable of handling pedestrian and vehicle traffic.  The November 18th posting of Ted Paine skiing down the First Avenue East ski jump caught the attention of nearly 19,800 individuals, while the December 14th posting of a picture showing the band stand being transported from its former place in City Hall Park to its current site on the river bank just west of the Historical Museum (then known as the Heritage Museum) was viewed by over 12,000 individuals.

In addition to the number of individuals reached by these posts, the comments which are attached to them suggest that people enjoy remembering the Prince Albert of the past.

Unfortunately, the Museum Educator position (the name of which will change to Programming and Outreach Coordinator) is currently vacant.  The incumbent of that position, Joanna Wreakes, recently resigned in order to take up a position at Government House in Regina.  We are hopeful to have the position staffed sometime in February so that we can continue to showcase our city’s history through social media.

In addition to our social media outreach, we have to the end of November received 333 requests for information from the Bill Smiley Archives and have hosted 101 researchers.  Again, the feedback we receive from those who use the archives is indicative of the impact that we have on families still living here, as well as those who are now living elsewhere.  An email which arrived a few days before I sat down to write this column is representative of such an impact.  The woman wrote:

“You were very helpful with my family history search last year.  Just wanted to let you know after all my searching…I did locate one of my dads and auntys living cousins.  She is close to 80 as well and living in Calgary.  My dad was overjoyed with the find.  We are planning a trip to Calgary this summer to catch up (it has been over 75 years after all).  Thank you again so very much for the work you do.  You made an 80 year old man not feel like an orphan.”

Often, in researching responses to the requests we receive, the information we uncover helps us to fill gaps in our knowledge regarding items which we have been researching for other reasons.  For example, in searching for information about material which was donated recently to the archives, I discovered that 1116 Central Avenue was the last building which Samuel McLeod built in Prince Albert.

This column, Museum Musings,  also brings interesting feedback from its readers.  Sometimes it is a note to let me know that my information is incorrect, and sometimes it is someone wanting to let me know that the column has brought pleasure to the reader.  I have heard from relatives of George Will, as well as a woman who attended the same elementary school as me (she responded to my column about the history of CKBI radio).  Again, the comments are often helpful in ensuring that the information we have in the archives is accurate and complete.

If you have received information which has helped you to become more aware of Prince Albert’s past, or if you have received pleasure as a result of the social media posts, or as the result of an archival request, or if you simply enjoy reading about the city, you might wish to make a financial contribution to the Historical Society.  Donations can be made in person, by mail, or by e-transfer (finance@historypa.com). Donations of $20 or more will receive a charitable tax receipt. On behalf of the Prince Albert Historical Society, it is my wish that you will have a safe and happy Holiday Season!  May the New Year be filled with health and happiness, and hopefully an opportunity for each of you to visit at least one of our museums.