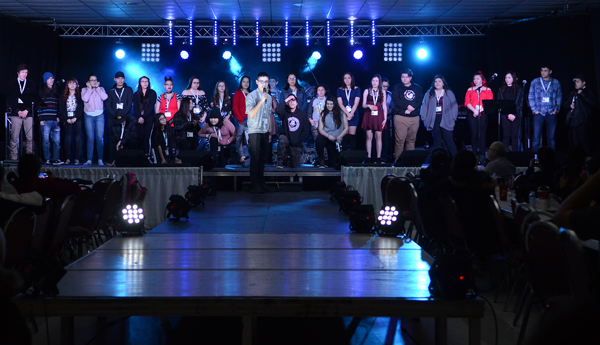 A Winter Festival tradition that’s been around for over a decade almost didn’t happen this year.

But this year, the funding that has traditionally supported the workshop fell through. As a result, for the first time in more than ten years, the workshop didn’t run.

“There were a lot of disappointed young people from all over. I’m from Pelican Narrows originally. I know quite a few who would normally go from Pelican to Prince Albert for that weekend.”

Merasty said the workshop teaches more than just public speaking, music and how media works. It also helps build self-esteem, gives kids a voice and teaches them that they matter.

“It’s such a powerful program,” she said.

“Young people are struggling every day with mental health. They have so many pressures today — social pressures, peer pressure, academic pressure and family pressure. It’s a lot for young people today and they need an outlet. That’s where sports come in and that’s great, but we’re not all hockey players or basketball players. A lot of kids are into arts, into music.”

Other kids who attend Northern Spirits might not be sure, but leave realizing they want to emcee or produce the show. They want to play an instrument or sing.

“It really gives them a platform to be heard,” Merasty said.

Merasty first learned about Northern Spirits when she was a band councillor. She had the youth portfolio and worked to bring young people down to participate in the workshop and the showcase. She saw first-hand the difference the program makes.

Even after moving away from Pelican Narrows, she said she’s “always” been a supporter, doing whatever she could.

She’s not the only one. Many people are passionate supporters of the program, perhaps none more so than Sheryl Kimbley, who has helped to organize and lead the program for several years. She explained the importance of the skills the youth learn as part of the program.

“The ability to get on stage and talk into a microphone is a very, very valued skill. Once you do that, you learn the power of your voice and you learn how important you are and how to be heard. For our northern youth, that is what needs to happen. They need to be heard. They need to learn how to use their voice. I think this is one of the ways we’re going to save our young people, giving them that voice and letting them know they’re valued. The stage does that.”

One of those participants last year was Aryle Bird. She moved the audience to tears last year when she conquered her biggest fear to live her greatest dream.

Bird had been singing, writing her own songs and drawing since being diagnosed with Sydenham’s chorea, a condition with involuntary movements and a leaking heart valve. It leads to anxiety attacks too.

The involuntary movements are treated with a medication, haloperidol, which can have some side effects. For Bird, that means hallucinations.

The Montreal lake teen had never had the courage or opportunity to get up on a big stage before last year’s showcase.

Aryle stood front and centre in front of dozens of people. She told her story, and about how she has, in the past, had trouble making friends.

Clad in red and black, wearing a headband with animal ears, she belted out a heartfelt rendition of Elvis Presley’s ‘Can’t Help Falling in Love,’ dedicated to someone back home in Montreal Lake she said was one of her only real friends.

“It’s the greatest thing that’s ever happened in my life,” she said after the show.

“It felt amazing. I got to sing on stage with a big crowd. I’ve never sung in front of as big of a crowd as this. It’s the greatest thing anybody could ever go through. It’s the greatest experience you can have. You can conquer your fear. You have a lot of support here.”

With the importance and the passionate support of the Northern Spirits program, those involved weren’t going to let something like a lack of funding stop them.

So even though the workshop didn’t happen this year, past Northern Spirits participants are doing what they can and are working together to put together a showcase, just like any other year, during the 2020 Prince Albert Winter Festival.

This year’s show is set for 1 p.m. on Saturday, Feb. 15 at the Prince Albert Exhibition. While it’s going forward, funds are tight. Merasty stepped up and set up a GoFundMe to help raise what she can to contribute to the showcase.

“We’re trying to bring those young people into Prince Albert that weekend. The fundraiser is just to help cover those other costs,” Merasty said.

“People are not being paid for their time — everyone is volunteering, but there are costs to lights, to sound, to food, to bringing them to town. It really is expensive and we don’t want this program — we’re hitting a bump in the road — but we don’t want it to be forgotten. We want it to remain fresh in people’s minds. The fundraiser is going to go to these young people, whatever we raise.”

Kimbley said many of the Northern Spirits youth were willing to come down to Prince Albert on their own dime to participate. She also said that Leroy Laliberte donated lights and sound, which they need to put the event on.

At least one organization has said it will consider helping out.

The goal is to remind people how important Northern Spirits is and to keep it going into the future.

“The youth of past shows have come together. A lot of them are grown up and have jobs and children of their own. They’re all assembling from all walks of northern Saskatchewan, coming at their own expense to save the show,” Kimbley said.

They will also be including testimonials about how the Northern Spirits program has hoped them. Kimbley said many of the past participants remain friends and lean on each other for support even after the showcase wraps up.

“We took a leap of faith and asked to be part of the festival one more year and asked if we could do this,” Kimbley said.

“They’re the ones losing their children, their classmates, their students, their grandchildren. They feel it every day. The fact that they’re fighting and coming forward for this speaks volumes to me on how much they need the arts in their communities.”

Kimbley is encouraging everyone to come out to support the showcase. Admission is $15 plus a Winter Festival Button. Merasty is hoping more people step up and help make this year’s show a reality.

“I’m doing this with the youth to revitalize (the program) and get our youth to learn how to work for themselves and to let everybody know that we’re not done,” Kimbley said.

“We got turned down but we’re not on the ground yet. I will continue to lobby for the funding hat needs to happen for the workshops to continue in November.

“I encourage everyone to come out and see what the arts have done for these young people and to know that we’re in a smaller world. If we help the youth in northern Saskatchewan, we’ll reap the benefits for years to come.”