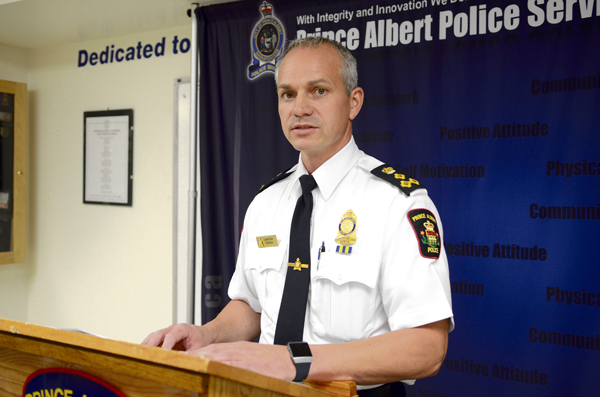 Police Chief Jon Bergen says the police force is aware of recent increases in both violent and property crimes and is doing what it can to respond and prevent more.

City police held a news conference on Friday in response to recent crime statistics indicating Prince Albert has had five homicides this year, 27 incidents involving guns and 114 incidents where knives were used or produced.

Guns have been fired eight times this year, Bergen said, including a pair of shootings last week.

Seeing five homicides in a year is not typical, Bergen said. Last year there were just two. The city hasn’t seen five in one year since 2003.

Arrests have been made in four of those deaths, while 18 people have been charged in connection with incidents involving guns and 44 in cases involving knives.

“Every death or serious injury … is its own tragedy and is a sad and scary time for our entire community,” Bergen said.

“I want to tell the public that as a police service, we are working hard to combat crime and arrest those responsible. We can say these incidents of violence are not random. In most cases, the suspects and victims are known to each other. Our goal as a police service is to get ahead of crime through proactive policing, rather than just responding to violence.”

After seeing a lull in property crime in the early part of the year, reports of break-ins spiked in the summer.

Bergen said police have had some success addressing this already.

A break-and-enter task force, announced on Aug. 21, has recovered a variety of stolen items and “made significant inroads” in connection with other break-ins, he said. Officers have interviewed or arrested nearly 40 people in connection with property crime investigations.

A gang suppression initiative this summer led to the arrests of 35 people and the seizure of weapons, drugs and drug paraphernalia.

Bergen said people should continue to be aware of their surroundings, but reiterated that much of the violent crime has been between people who know each other.

“We are working aggressively to ensure we can provide the safest community we can. We are aware that because of the amount of concerning incidents that have occurred, the community will naturally call their safety into question,” he said.

“Members of this police service are members of this community … and we are going to do what we can to protect it and keep it safe.”

He said the new community policing unit, which was recently announced and will consist of two officers, will increase visibility downtown and in the city’s shopping districts to help deter crime.

The force is also partnering with whomever they can to work towards crime prevention, he said.

“Part of our work as a police service is addressing the root causes of crime. We are already actively participating in discussions with various levels of governments and community groups to find solutions to various factors that can lead to criminal activity.”

“The biggest increase we’ve seen with property crimes is break-and-enters to outbuildings. When I looked at a graph it was quite clear. When we start to see meth in the community — between trafficking charges, possession charges and seizures of meth — we start to see an increase in property-related and violent offences too. We believe that if we can have an impact there, that’s going to have an impact on the outcomes and what the long-term solution is.”

The city police will also be working more closely with the RCMP in the coming year, Bergen said.

“That’s going to be a visible unit used to focus locally and into the rural area on violent crimes, property crimes and gang-type crimes,” Bergen said.

He had a message for the public.

“The message (to the public) needs to be we are in tune, we are responding, we are actively investigating each one of these incidents to bring the person or persons into accountability for their actions.”