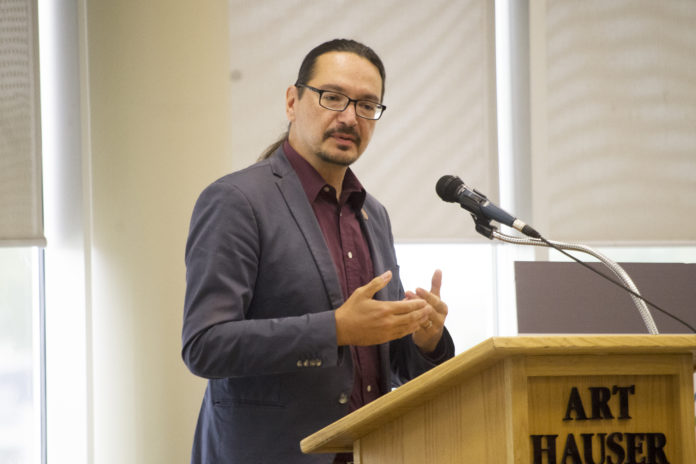 Kevin Lamoureux’s family has seen both the good and the bad in Canada.

His mother’s family arrived from Ukraine shortly after the First World War. He was told many times about their fear of the Soviet government, and their flight to a land of peace and hope called Canada.

It was different for his father’s family, Ojibway people from Treaty 2 territory, which runs from the shores of Lake Winnipeg down to the southeast corner of Saskatchewan.

I will never be able to say enough good about what Canada has done for my Ukrainian family,” Lamoureux says during “Reconciliation as a Relationship,” a short talk hosted by the Rotary Club of Prince Albert. “But, I also recognize that as beautiful as this country is, it hasn’t reached its full potential and can never reach its full potential when its own citizens are suffering under circumstances that other people flee countries to escape from.”

Helping Canada reach that potential has become a bit of a goal for Lamoureux, an associate vice-president of Indigenous Affairs at the University of Winnipeg. For that to happen, he says Canadians need to wrestle with a past many people weren’t taught about. That past includes everything from broken promises to disregarded treaty agreements to a residential school system that killed an unknown number of children.

During Friday’s speech in a packed Ches Leach Lounge, Lamoureux emphasizes that it’s not the fault of present day Canadians. We can’t help what we’re taught or how we’re brought up, he says. However, he’s adamant that Canadians need to start asking tough questions about their history.

“For me, it’s always goes back to education,” he says in an interview following his speech.

This is Lamoureux’s wheelhouse. In addition to his role at the University of Winnipeg, he also spent one year as the National Education Lead with the National Centre for Truth and Reconciliation.

Saskatchewan has made great strides in education, he says, especially with the Saskatchewan Treaty Commission, which laid the groundwork for a lot of other provinces, like Lamoureux’s native Manitoba.

Ideally, he’d like to see Canadians go through each of the Truth and Reconciliation Commission’s 94 calls to action made in 2015. He’d also like Canadians to ask themselves, ‘why are these recommendations necessary.’

“It’s not an exercise in pity,” he explains. “It’s for us (Canada) to reach our potential, to allow our economy to flourish, to be the society we were meant to be.”

Lamoureux knows this won’t be quick or easy. He says there will be a lot of anger and a lot of sadness and Canadians dig into their past. However, he also stresses that reconciliation, if done correctly, won’t destroy Canada. Instead it will make it stronger.

“This isn’t a zero sum game,” he says. “It’s not that one loses if another benefits. That’s the wrong way to think about this. This is an exercise, if we’re doing it the right way, for mutual benefit, for mutual respect, and for a better future for all of our kids.”

Lamoureux’s speech in Prince Albert goes about as well as planned. He trades friendly barbs with Saskatchewan Roughrider fans about the upcoming Labour Day Classic, and receives a standing ovation when he finishes speaking. Afterwards, a long line of attendees—including Saskatchewan’s new Lieutenant Governor—waits to greet him.

He sees reconciliation as an opportunity for Canadians, and he constantly thanks the older generation of residential school and ‘60s Scoop survivors for bringing the issue to the forefront of the national debate.

The road to restoring the relationship between Indigenous and non-Indigenous people is a long one, he explains, but he’s optimistic that Canada can reach the end.

“It’s never going to happen fast enough, but at the same time, it’s happening faster than I ever thought it would,” he says. “I hope that we walk away feeling empowered. I hope that we feel optimistic about the future.”