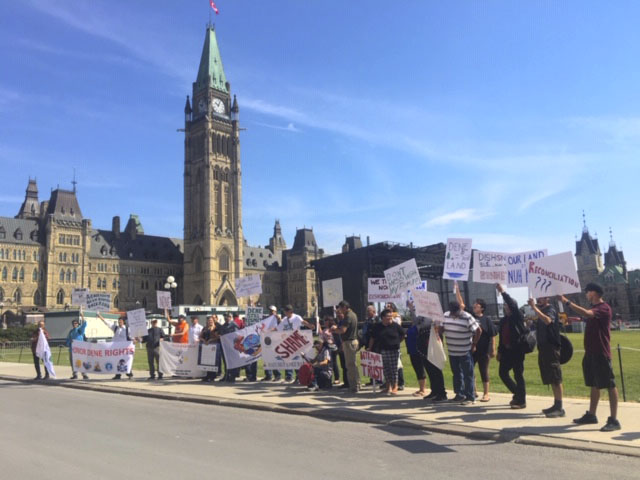 A dispute between the Government of Canada and five Denesuline nations from northern Saskatchewan and Manitoba appears to be headed to court.

According to a press release issued Friday, Minister of Crown-Indigenous Affairs Carolyn Bennett will be taken to court by five Dene nations over what they say is the government’s 11th-hour decision to shut down the North of 60 settlement negotiations just as the two sides were about to initial maps and agreement text.

The group of Dene nations, which includes the Athabasca Dene of Black Lake, Fond Du Lac and Hatchet Lake, as well as the Northlands Denesuline and the Sayisi Dene First Nations of Manitoba, filed a court application Friday seeking an order that Canada justify its decision and meet with a judge to work out a return to the negotiating table.

The federal court application hearing, should it go forward, will likely take place at the Winnipeg office of the Federal Court. A hearing has been requested before the end of June.

“It is ironic and sad that we have to take Canada back to court on a day that celebrates the Indigenous Peoples of Canada,” said Geoff Bussidor, Chief Negotiator for Sayisi Dene First Nation, in a press release.

The dispute dates back to a pair of court cases filed in the 1990s that alleged the Dene were left out of discussions about land in the Northwest Territories and Nunavut they contend are part of their historic and current territory.

Earlier this week, the Denesuline group protested on Parliament Hill to demand a meeting with Bennett and with Prime Minister Justin Trudeau. They say they were on the verge of initialling an agreement that has been in negotiations for 18 years when Canadian officials sent an email and a letter suspending negotiations until further notice.

The agreement would have recognized Dene rights in portions of the Northwest Territories and Nunavut, including harvesting and land rights.

The group says they were told that the delay was to continue consultations with other impacted groups.

In a written statement provided to the Herald, Bennett’s office said concerns have been raised by other Indigenous groups which also use the land in question.

“No relationship is more important to Canada than the one with Indigenous Peoples, and we are committed to renewing that relationship on the basis of the affirmation and implementation of rights, respect, cooperation and partnership,” Bennett’s office said.

“Concerns have been raised by Indigenous groups in the Northwest Territories about the terms of the draft agreement and the impact on their communities and rights. We have a responsibility to meaningfully consult with these communities in order to understand and work through the issues they have brought forward.”

The Dene group says they had been assured by Bennett and her office in 2018 that the agreement would be initialled while consultations were ongoing and that the deal would be done before the 2019 federal election.

They said they were willing to further modify the language in the agreement to help allay concerns of other Indigenous groups using the land.

The federal NDP, the PAGC, FSIN and AFN have joined the group in calling on the ruling Liberals to honour their word and initial the agreement so communities can begin the ratification process.