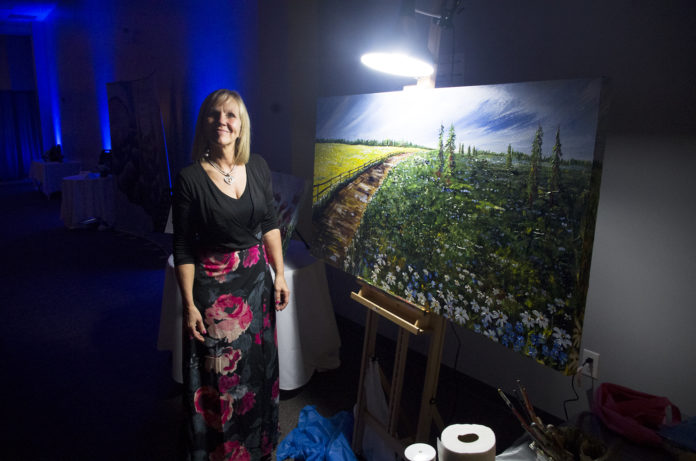 After several hours entertaining guests, artist Ramona Swift-Thiessen is ready for a break.

There’s nothing unusual about an entertainer needing a quick rest at the end of a show. What is unusual is that Swift-Thiessen isn’t a singer or a dancer or a musician. She’s a painter, and as the evening draws to a close, she’s resting comfortably in front of a drying canvas that was empty at 5:30 p.m. that night.

“Adrenaline is my friend,” she says with a laugh. “I go much faster in public than I do in my home.”

Artists in other disciplines are used to having their time in the spotlight, where audiences hang on their every word or movement. For many painters, the act of putting brush to canvas is a more solitary activity best carried out alone in a studio, or at a workshop or gallery with a few friends and classmates

As a Performance Painter, Swift-Thiessen takes painting out of her home studio in Waldheim and into the public view. On this day, it’s for patrons at the Rotary Club Wine Premier in Prince Albert, who can stroll by and watch her work, only to come back a few minutes later to see a tree or a road or a fence that wasn’t there before. Once it’s dry, her work will be auctioned off with the proceeds headed to the Mont. St. Joseph Home.

“Lots of people are fascinated just to watch the process,” Swift-Thiessen explains. “I really enjoy the people, and I enjoy the vibe in the room.”

Performance Painting (also sometimes called Live Painting) has a long history, with artists setting up canvases everywhere from piano bars to music concerts to wedding receptions. Sometimes they paint to music, and sometimes not.

American painter LeRoy Neiman is one of the most well known examples of the genre. Neiman would set up his canvas at prestigious sporting events, like the 1976 Summer Olympics in Montreal, and use the athletes around him as inspiration for his work.

Swift-Thiessen prefers drawing in her sketchbook before hand to a more improvisational approach. The landscape portrayed in her current painting is sketched out in the pages of a notebook before she even starts. On this day, it’s a beautiful summer scene, which contrasts sharply with the bleak weather swirling around the city.

“I just wanted to do something that’s the opposite of what I’m seeing outside,” she says.

Painting in front of an audience wasn’t something Smith-Thiessen ever dreamed of doing. In fact, for much of her life she didn’t even like close friends and family members viewing her work. It wasn’t until she began teaching art classes herself that she started to feel comfortable displaying her pieces.

She’s now in her second year as a Performance Painter, having done more than 30 paintings this year alone. Her audiences run from small intimate settings of just a few people, to crowds of roughly 2,000 at TCU Place in Saskatoon.

This evening is a successful one. The guests are entertained, and an auctioneer is one hour away from selling her painting for $4,100.

“I realized it’s not so bad if people see it looking messy to start, or if they see the middle,” she explains. “I don’t know why that was always such a big thing, that ‘I can’t let them see it looking messy.’ That’s kind of the magic of it. How is she going to pull it all together?”